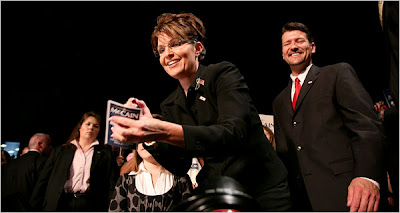 
The Governor of Alaska for less than two years and the mayor of a town of about 5-7K folks before then. This is who McCain picks to take over the presidency?

an F.B.I. official said Monday the bureau did not vet potential candidates and had not known of her selection until it was made public.

In doing so, she refutes the claims made in "Palin Made an Impression From the Start: Fellow Maverick Survived McCain's Thorough Vetting Process, Aides Say," where Dan Balz and Robert Barnes of the Washington Post acted as front page stenographer to the McCain campaign on August 31, writing,

Rick Davis, McCain's campaign manager and the person at the point of the vice presidential process, said there was no abrupt change of course in the final hours. Nor, he said, was Palin selected without having gone through the full vetting process that was done for other finalists. That process included reviews of financial and other personal data, an FBI background check and considerable discussion among the handful of McCain advisers involved in the deliberations.

"Nobody was vetted less or more than anyone in the final stages, and John had access to all that information and made the decision," Davis said. "It's really not much more complicated than that."

It's interesting and damning, if true, that McCain wasn't truthful about an FBI vetting. Also that he didn't get his choice of running mate who would have been Lieberman or Ridge, both supposedly disqualified as being pro-choice.

As I mentioned at Newstrust, the story raises some questions in my mind, as there are so many anonymous sources, other than the Alaskans, who are willing to go on record. And what Bumiller fails to tell you or credit, in typical NYT fashion, is that in "Choice stuns state politicians," Anchorage Daily News reporters Sean Cockerham and Wesley Loy published interviews with many of the same folks on August 29 and that, although fellow Republicans, the three quoted by the NYT, all are her political adversaries. From that story,

Lyda Green said she thought it was a joke when someone called her at 6 a.m. to give her the news. "She's not prepared to be governor. How can she be prepared to be vice president or president?" said Green, a Republican from Palin's hometown of Wasilla. "Look at what she's done to this state. What would she do to the nation?"

Green, who has feuded with Palin repeatedly over the past two years, brought up the big oil tax increase Palin pushed through last year. She also pointed to the award of a $500 million state subsidy to a Canadian firm to pursue a natural gas pipeline that is far from guaranteed.

Former House Speaker Gail Phillips, a Republican political leader who has clashed with Palin in the past, was shocked when she heard the news Friday morning with her husband, Walt.

I said to Walt, "This can't be happening, because his advance team didn't come to Alaska to check her out," Phillips said. Phillips has been active in the Ted Stevens re-election steering committee and remains in close touch with Sen. Lisa Murkowski and other party leaders, and she said nobody had heard anything about McCain's people doing research on his prospective running mate. "We're not a very big state. People I talk to would have heard something."

And while the local article could not get an interview with another NYT interviewee, it noted that Ruedrich, that Palin's complaints against him

before she became governor led to the state fining him on ethics charges.

BTW, Bumiller co-authored another piece August 30 with Michael Cooper on why Lieberman was deleted from the veep list.
Posted by Beth Wellington at 11:07 PM