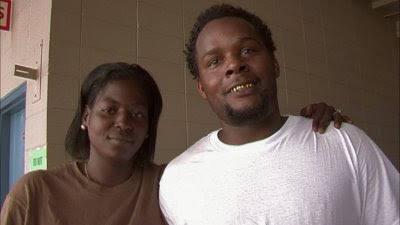 Photo from Trouble the Water of Kimberly Rivers Roberts and Scott Roberts.

Co-directed and co-producers by Tia Lessin and Carl Deal, the film won the Sundance Festival's grand jury prize for best documentary. In a 9/15/08 interview on Democracy Now, Lessin tells how the filmakers, who also produced Michael Moore's Fahrenheit 9/11 and Bowling for Columbine, came to cover the story by following the couple from New Orleans’ Ninth Ward, as they return home two weeks after the hurricane.

Carl and I went to central Louisiana about ten days after the storm. You know, Bush, two days ago, was commending the Louisiana National Guardsmen for their work rescuing—well, they were actually in Iraq at the time of the storm. And Carl and I went down to central Louisiana to tape their homecomings about ten days after the storm. And at one point, the National Guard shut us down, because we had found out that the high-water vehicles were in Iraq, along with the National Guard, and they didn’t like the questions we were asking. Carl wandered over to the Red Cross shelter, and Kimberly wandered right up into our frame and started to tell her story on camera.

The 9/15/08 review from The New Yorker describes the home video included in the film shot by Kimberly Roberts as the storm started:

The soundtrack is like the roar of an express train racing through a tunnel; the footage, while chaotic, is a terrifyingly expressive struggle to record what’s going on without dying. The camera flies wildly from one hand to the next, with glimpses out the window as the water rises to the second floor of the house—on the street, we can see a stop sign at the top of a long pole, and it’s nearly submerged.

Mike Scott of the Times Picayune gave it four stars, saying the film is as important as it is moving.
Posted by Beth Wellington at 7:54 PM