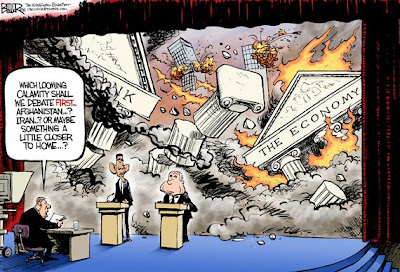 "The First Debate" which Nate Beeler says had to draw for the Sunday Washington Examiner before the debate even took place.

Obama's September 26 debate with McCain reminded me of a therapy session, as moderator Jim Leher told the men to

talk to each other about it. We've got five minutes. We can negotiate a deal right here.

And then to Obama,

...Do you have something directly to say, Senator Obama, to Senator McCain about what he just said?

...I'm just determined to get you all to talk to each other. I'm going to try.

Robert Dreyfuss, who writes for The Nation, was not impressed with Obama, especially with regard to foreign policy, writing that

he utterly blew a chance to draw a stark contrast with John McCain on America's approach to the world.

Posted by Beth Wellington at 11:28 PM