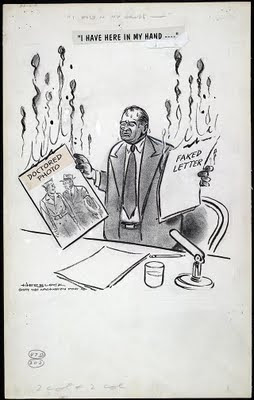 This cartoon by Herblock (Herbert Lawrence Block) is from the 2000 Library of Congress exhibit and appeared in the May 7, 1954 Washington Post.

Dendron resident Thomas Byrd waved a petition before Town Council September 14, saying he had 190 supporters for the plant, according to Smithfield Times's Jim Tuttle (email) reports in his September 16 story "Dendron to send project to county planners."

Dendron Councilwoman Misti Furr tells me that she has never seen Byrd's petition up close (see also this post regarding the proposed plant and Byrd's petition.) That had me thinking of ol' Joe McCarthy and the list he waved February 9, 1950 at a Lincoln's birthday address to the Women's Republican Club of Wheeling, West Virginia According to the U.S. Senate's site, he said,

While I cannot take the time to name all the men in the State Department who have been named as members of the Communist Party and members of a spy ring, I have here in my hand a list of 205.

But as Robert Griffith (email), now the chairman of the History Department at American University wrote in In The Politics of Fear: Joseph R. McCarthy and the Senate (2d ed., 1987),

Griffith explains, that McCarthy might have been extrapolation from a a letter from Secretary of State James F. Byrnes to Congressman Adolph J. Sabath of Illinois, dated July 26, 1946, which had appeared in the Congressoinal Record (page 50)

...a preliminary screening of some 3,000 federal employees...had resulted in recommendations against the permanent employment of 285. Of these 285, the employment of 79 had already been terminated as of July 1946; 285 minus 79 leaves--if your arithmetic and logic ar enone too scrupulous--2005 "communists in the State Department.

The next day, enroute to Salt Lake City for a second speaking engagement McCarthy changed planes in Denver where

he was surrounded by reporters clamoring for the list of "Communists" in the State Department. He offered to show them the list, but then "discovered he had left it inhis baggage on the plane." there was an engaging picture of the senator peering into his briefcase for the elusive list [in the Denver Post of February 11, 1950.]

Mr. Byrd's list--of those he claims as supporters, rather than enemies--also is not readily available for inspection. And no reporter has even reported asking for it.

I grew up reading the WaPo, so Herblock was my hometown cartoonist. His last cartoon appeared on August 26, 2001 and he died on October 7 of that year. I still miss him. I've got to wonder what Herblock would have drawn about 9-11 and the subsequent attack on civil liberties, on the shrill attacks we hear now of socialism and worse being attributed to Mr. Obama who is nothing of the sort--although his critics to the left of the political spectrum might wish he were.

I'd love to see what he do with health care reform, which continues to flounder--the Senate Finance Committee deleting the public option. Nick Anderson's (email, blog, bio) 8/11/09 cartoon "Bipartisanship" for the Houston Chronicle foreshadowed the latest on money, politics and healthcare from Open Secrets today. 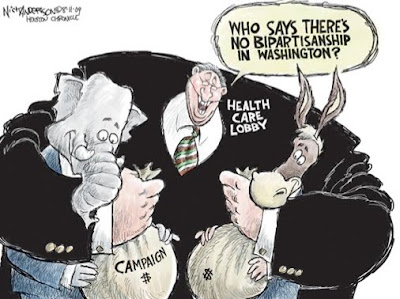 With Herblock gone, I'd argue we can still get an idea of what he might have done by looking at Anderson's 9-11 gallery. Anderson started at the Chronicle February 13, 2006, after starting his career at Louisville Courier-Journal 1991. He won the Pulitzer in 2005. for instance here's one from November 23, 2001: 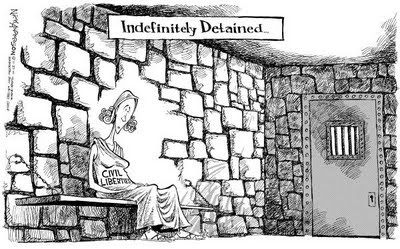 Anderson's philosophy according to his bio:

An editorial cartoonist, fundamentally, should be anti-establishment. No matter which party is running the government, it is the essence of satire to question authority.

Herblock would be proud.
Posted by Beth Wellington at 12:29 PM