Take this job and shove it: former TMK security guards at Edwight treesit 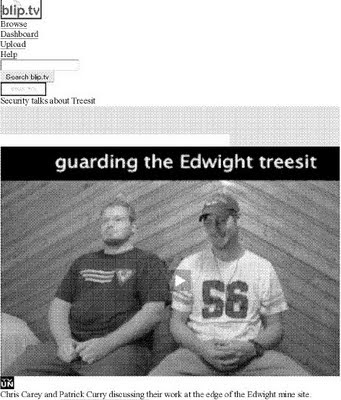 Massey CEO Don Blankenship had told the AP that

The coal won’t spoil for a million years. I doubt the tree climbers will be there then.

Apparently Blankenship tells the AP one thing and TMK something else? Tonight, I got an email from Charles Suggs at Climate Ground Zero. He sent a link to a video of the almost hour-long interview (10 minute youtube version is here) with Chris Carey and Patrick Curry, two private security guards who say they walked off the job because of how they were ordered to harass Nick Stocks and Laura Steepleton.

Stocks and Steepleton are the Climate Ground Zero tree sitters at Massey's proposed Edwight mountain demolition site. August 31, they descended from their platforms in two eighty foot poplar trees, after preventing blasting over the community of Pettry Bottom since the prior Tuesday.

So here's something out of the blue... Monday night I got a call from a fellow who worked a security shift at the base of the tree sit for Massey. He worked for the private security firm, TMK, that Massey hired to deprive the sitters of sleep and what not. Anyway, he walked off the job because of how they were ordered to treat the sitters and called me spillin the beans. Several others also walked off. Later that night, we got someone with a camera down to his house two hours away and recorded an hour-long interview with him and a friend of his who also walked off. They're now also in touch with our lawyers.

Steepleton and Stocks had climbed the trees within 300 feet of blasting and 30 feet of the Massey Energy Edwight Surface Mine and hung two banners “Stop Mountain Top Removal” and “DEP – Don’t Expect Protection.” Mining Safety and Health Administration regulations require that non-blasting employees all be cleared from the area before blasting can take place. You can listen to an interview of Steepleton and Stocks by Bobby Nelson on Tri-State-talk, airing on Huntington station WRVC, one of the oldest radio stations licensed in WV. (Hat tip to Heath Harrison at West Virginia Blue.) 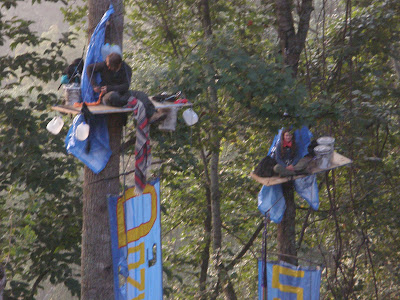 Charles said in a news release that date about the two:

For the past five days, they endured psychological torture, verbal assault and threats. Anonymous eyewitnesses said the Massey-hired security guards were telling the treesitters they were going to rape and kill the treesitters. On Sunday night, the guards put a running chainsaw to both trees, cutting them a little bit. The guards told Steepleton today that they oday that they were going to get them out of the tree no matter what because Massey ordered them to.

Stocks descended first and at that point, according to Suggs, WV native and activist Bo Webb had talked to State Police Sgt. about standing at the base of Steepleton’s tree to protect her from the guards, but Smith said he’d have to arrest Webb if Webb went up to the sit.

I told him he’s arresting the wrong people.

Judy Bonds sent us a copy of the letter to the editors she had sent the Charleston Gazette. (UPDATE: published on September 3):

Tree-sitters Nick and Laura are my heroes. These brave youngsters tried to protect the people living - or rather, dying - below a strip mine site. Tree-sitters are protecting all people living below these war zone sites. The coal companies are the ones who should be arrested for terrorizing, blasting and poisoning people. The sitters must deal with difficult living conditions sitting 80 feet high in trees. This requires courage and skill. The workers and security guards on the Edwight site behaved like thugs in rolling and kicking rocks down the hillside, blaring air horns and brandishing a chainsaw. This 24-hour sleep deprivation tactic made the situation more dangerous. The close-by community residents can hear and see their thug-like tactics. Gov. Manchin has been asked several times to stop the violence before a serious or fatal incident happens. Massey Energy's anti-American hate fest will only incite more violence and make things worse as the governor's inaction is an indication of his approval.

TMK Security of Delbarton, WV (photo below of its offices from its site shown above) boasts

TMK Security offers a wide variety of services to fit your companies needs and budget. From armed officers to plain clothed officers mobile or stationary TMK has the solution for you. Contact us and we will be happy to discuss your needs...TMK Security Officers are a cut above the rest. All TMK officers are drug screened and have a full criminal background check completed before their first day of employment, so you as a customer can have peace of mind your property is secured by the highest quality of officer.

The firm (B) is two-and-a-half hours southwest of Pettry Bottom (A), site of the Edwight mine according to Google's driving directions: 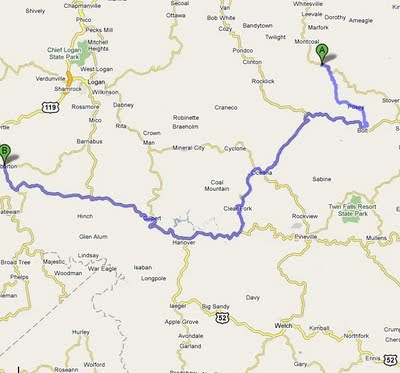 If Blankenship is talking out of both sides of his mouth, it won't be the first time. Remember how he called his PAC, "For the Sake of the Kids." What a name for someone with a slurry impoundment sitting above Marsh Fork elementary school.
Posted by Beth Wellington at 10:04 PM