Why have that Star of David on Israel's flag? 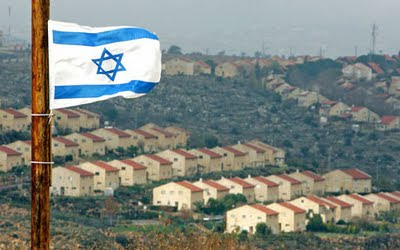 Photo accompanying the May 25, 2009 story in the Telegraph, "Benjamin Netanyahu: Israel will expand settlements."

The Netanyahu government in Israel is getting bolder all the time. Israel human rights group Peace Now (email) and Yesh Din have each brought suit about illegal construction on the West Bank and the state is no longer promising eventual demolition. This at least according to Haaretz, Israel's English language newspaper. In "Israel hints it may retroactively legalize settlement construction," Chaim Levinson writes,

The two responses are a departure from the state's usual response that the structures are illegal and are expected to be demolished...

In several past cases, including construction in the settlements of Harsha, Hayovel, Neveh Tzuf, Netiv Haavot and Amona, the state told the court the structures were illegal and were due to be destroyed in keeping with the priorities of the defense establishment.

The statements in court seem to be a direct contradiction of Ehud Barak's press statement in late August:

The defense minister has declared a number of times that the evacuation of illegal outposts is our obligation as a democratic state...This is a process which will be implemented in weeks, not years.

The statement came after Deputy Premier and Strategic Affairs Minister Moshe Ya'alon three weeks ago had complained that the state prosecutor wa not faithfully representing the current government's view on settlements in promising demolition.

And it's not as if, even under the now maybe former party line, that the courts were siding with the Palestinians. Back last November, Akiva Eldar (email) had written a piece of news analysis, "Israeli legal system going soft on settlers."

During 41 years of occupation, many settlers and supporters of Jewish settlements in the West Bank have risen to senior posts in the Israel Defense Forces and hold key offices in the Civil Administration as well.

The friendly handling of settler Noam Federman's case a week ago, by Judge Moshe Drori, was not unusual. Although the settler breached an area declared a "special security zone," violating a military order and promises made by the local council head to restrain renegade settlers, Drori reprimanded the state for removing Federman.

So what has happened to Israel's obligations? Knowing what happened during the Holocaust and how other countries turned back fleeing Jews, I've always seen the value in a homeland. And yet I've been torn by the way the land was appropriated. And now, Israel's possible change in policy has got me wondering. Would the current government want to be treated this way by the Palestinians if their situations were reversed. If not, what happened to the Golden Rule? Why have that Star of David on the flag. It's besmirching those of us that believe our our faith requires social justice.
Posted by Beth Wellington at 10:30 PM