Latest wingnuttery: Green for All logo is secret community iconography 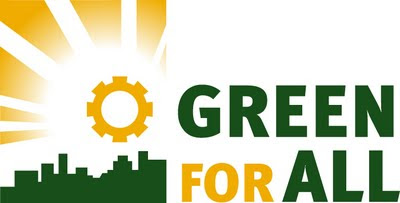 Logo from the website Green for All, an Oakland-based non-profit started by Van Jones to press for environmental quality, justice and economic opportunity.

In the wackiest thing yet, stumbled on this comment at StealthFusion.com under research "Photo: Van Jones makes a Salute." (Look it up, I'll not bolster the Technorati score). Complete with a slew of supporting illustrations, "Ace, an administrator there, describes the above logo as

Kind of reminds me of the supposed connection between Proctor and Gamble and the Church of Satan.

So, did J. Edgar Hoover or Joe McCarthy rise from the grave? No, it's shock jock Glen Beck, who's very much still with us, Besides his television show on Fox, his radio program and his website, Beck has 118,277 followers on Twitter. On July 24, Beck tweeted this message to what he calls his Watch Dogs:

We are transforming as a nation. It is about Race, Social Justice, Control through czars etc, class warfare & global governance.Stand&speak

The Color of Change, of which Jones was a co-founder, had complained about Beck's statement :

This president has exposed himself as a guy over and over and over again who has a deep-seated hatred for white people ... this guy is, I believe, a racist.

Beck is on a campaign to convince the American public that President Obama's agenda is about serving the needs of Black communities at White people's expense. It's repulsive, divisive and shouldn't be on the air.

So Beck put out a contract on Jones's head, seemingly in retaliation for the Color of Change campaign to persuade advertisers to drop Beck's show. And Van Jones, absent any support from Obama, announced his resignation today. That's right, the only visible member of the administration to say Appalachian needed something new, not mtr.

Back on March 10, 2009, the Obama White House was happy enough to align itself with Van Jones, calling him "an early green jobs visionary" and appointing him as Special Adviser for Green Jobs, Enterprise and Innovation at the White House Council of Environmental Quality (CEQ).

Van Jones has been a strong voice for green jobs and we look forward to having him work with departments and agencies to advance the President’s agenda of creating 21st century jobs that improve energy efficiency and utilize renewable resources. Jones will also help to shape and advance the Administration’s energy and climate initiatives with a specific interest in improvements and opportunities for vulnerable communities.

Jones is the founder of Green For All, an organization focused on creating green jobs in impoverished areas. He is also the co-founder of the Ella Baker Center for Human Rights and Color of Change, and was the author of the 2008 New York Times best-seller, The Green Collar Economy.

Now, however, they have thrown him under the bus. As Jane Hamsher noted in "Van Jones: A Moment of Truth For Liberal Institutions in the Veal Pen."

If you can't get it together to at least put out a statement of support for Van Jones and condemn the White House for using him as a sacrificial lamb to right wing extremists that will devour us all if left unchecked, it's time to add "proudly liberal only when it doesn't matter" to your logo and be done with it.

This kind of reminds me of when President Bill Clinton didn't stand by Lani Guinier ...And yet, it's okay for Obama's chief speechwriter Jon Favreau to drunkenly grope a cardboard cutout of Secretary of State Hillary Clinton or for Treasury Secretary Timothy Geithner to "forget" his taxes.

If anything, Obama can be accused of the the opposite of Beck's claims: the President seems willing to kowtow at the expense of the disenfranchised. Van Jones, when asked why Republicans were more effective when they held the Congress, infamously said

The answer to that is: They're assholes. That's a technical political science term. And Barack Obama's not an asshole. I will say this, I can be an asshole. And some of us who are not Barack Hussein Obama are gonna have to start getting a little bit uppity.

Lord knows, we need someone who's willing. Beck, smelling blood, even before Jones's resignation, had, on September 3, issued his next fatwah on Twitter:

Watch Dogs: FIND EVERYTHING YOU CAN ON CASS SUNSTEIN, MARK LLOYD AND CAROL BROWNER.

Posted by Beth Wellington at 10:37 PM