Are Electric Co-ops All So Different? 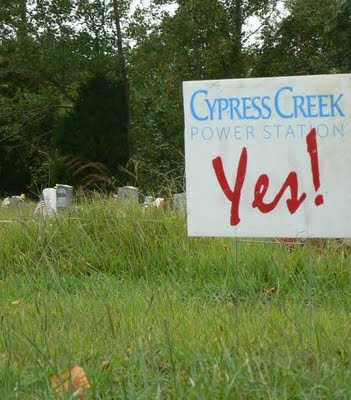 Photo taken by Joseph Robers on September 10 on his way to work.

The Old Dominion Electric Cooperative argues it is different than commercial utilities because it adheres to the "Seven Cooperative Principles," the last of which is

Concern for Community—While focusing on members needs, cooperatives work for the sustainable development of their communities through policy.

But sustainable development evidently includes forging ahead in its efforts to build yet another coal fired plant in Virginia, which I first wrote about last December 6, at a time when utilities in other states are abandoning such efforts--the proposed Cyprus Creek Power Station, currently slated to cost $6 billion.

No wonder the Environmental Protection Agency keeps putting us — as it did again in April — on the list of places with air unhealthy to breathe. [I've written Dietrich to ask her for her sources and will update to include them if I hear back.]

I felt this should've been put in the hands of the people of Dendron.

Furr had submited the resolution establishing the town's own planning commission in July.
ODEC had objected and Town Attorney C.B. Fison advised that the July vote was illegal since such a commission had been on the books since 2001.

The Smithfield Times's Jim Tuttle (email) reports in his September 16 story "Dendron to send project to county planners," that about a dozen people spoke in favor of retaining town control. Bill Richardson, a nominee for the town commission said,

Surry may not have the best interest of Dendron in mind

I don’t believe we should make anyone else responsible.

According to Tuttle, after the opposition had spoken, Mayor Pierce invited a representative of the supporters to speak. Thomas Byrd held up a petition that he said contained the names of 190 people in favor of using Surry’s Planning Commission. (Tuttle does not report how many of the 190 were town voters, but it seems likely that not all were, since the total population of the town in 2000 was 297 and that, of course, includes children.) Although there are 11 on the County Planning Commission, Byrd argued that the membership of Councilwoman Furr would serve to represent the town's interests.

The truth about the economics of climate change is that it’s relatively easy being green....

Earlier this month, the Congressional Budget Office released an analysis of the effects of Waxman-Markey, concluding that in 2020 the bill would cost the average family only $160 a year, or 0.2 percent of income. That’s roughly the cost of a postage stamp a day. By 2050, when the emissions limit would be much tighter, the burden would rise to 1.2 percent of income. But the budget office also predicts that real G.D.P. will be about two-and-a-half times larger in 2050 than it is today, so that G.D.P. per person will rise by about 80 percent. The cost of climate protection would barely make a dent in that growth. And all of this, of course, ignores the benefits of limiting global warming.

But ODEC and and its member cooperatives, with their sustainable development are part of an effort to get co-op customers to contact Congress complaining about how climate legislation. The form letter reads,

Now more than ever, I am very concerned about what rising energy costs will do to the average person. Many do not have the ability to pay higher electric bills. Please balance any votes you cast about electricity with the need to keep it affordable.

Sounds familiar? It reminds me of those forged letters that Bonner and Associates sent to Charlottesville CongressmanTom Periello and others, which I wrote about on August 28. So do ODEC's statements that the arguments brought by the Southern Environmental Law Center are fiction.

Makes me think that electric co-ops don't seem all that different than others lobbying to preserve coal interests.
Posted by Beth Wellington at 12:01 PM