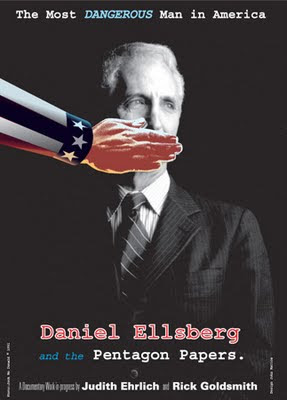 Poster for Judith Ehrlich and Rick Goldsmith's documentary The Most Dangerous Man in America, which had its first theatrical showing today.

Daniel Ellsberg had been making copies nights since 10/1/1969---7,000 pages, a few at a time-- month after month, on a slow XEROX machine at a small advertising firm owned by a friend of a friend. A military analyst for the RAND Corporation, Ellberg had served as an advisor to Kissinger and Nixon. And as he told Amy Goodman today in an interview on Democracy Now, the facts pointed to

essentially an endless war in Vietnam, which is not exactly what Nixon had campaigned on. He had talked about getting out, and yet—he talked about getting out with honor, which really meant, to him, victory. And what he was hearing from the questions that I drafted for him, which were answered by the Joint Chiefs, was that the ability of a Vietnamese to operate without US air support indefinitely was never. That meant an indefinite US commitment to Vietnam. That’s not what the public was being told.

In 1971 fwhen Ellsberg leaked what came to be known as the Pentagon Papers to the NYT, he started a firestorm which would eventually lead Nixon to resign. He had decided

it’s my job to do something to get us out.

He had been inspired by Randy Keeler. He says Keeler

showed me that I could do something that I had never thought of, and that was risk my clearance, risk my career, risk my new relationship or my regained relationship with Patricia [now his wife], go to prison for the rest of my life—very heavy costs—with the possibility of informing the public in a way that would save hundreds of thousands of lives. And when I saw Randy, who was going to prison as a draft resister, rather than go to Canada, rather than to be a CO, I realized I could do what they did, and it put the question in my head: what can I do now that I’m willing to go to prison?

With the current escalation in Afghanistan, Ellsberg sees relevance today for what he did almost 40 years ago:

I look at this film, and I watch the bombs falling, and all I can see in my mind are the bombs, the same bombs, falling over Afghanistan, or Vietnamistan, and Iraq right now. And we’re really facing, at this moment, a crisis of decision that’s just like the one that’s in the film, which I failed at the time, where the President is doing something that I feel will be a disaster, and I kept my mouth shut about it, the change from 70,000 men in the spring of ’65 to an open-ended commitment, starting with another 50,000, which I knew was on the way to hundreds of thousands. ...

We need people to put out, to tell the truth, and to do it, not the way I did, not after the escalation, not after the bombs have fallen, but right now. Right now. And for the Congress to hold the hearings that will entertain those people.

Posted by Beth Wellington at 10:56 PM