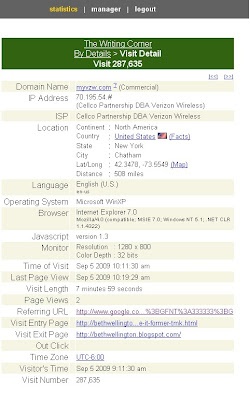 Well, the Verizon saga continues. We know Verizon Wireless hears us now, as you can see above from a visit to my blog this morning. But Corporate Strategy and Policy chief Jim Gerace's (email, 908-559-7508) says says bloggers got the Glenn Beck story wrong. In his interview w. Steven Mufson for today's WaPo story, "Verizon Wireless Criticized by Green Groups for Backing Event," he says,

We never pulled ads....We had a commitment to Fox for a number of ads. They placed them. We satisfied that commitment, and the last time any ad of ours ran in that time slot was Aug. 11 -- about a week before bloggers attacked.

He also is staying put on Verizon's sponsorship of the pro-mtr Rally for America.

Nobody knows what pullout means. All the damage is done. All the publicity for the event went out with our name on it . . . There's nothing else to do....we also can't allow the blogosphere to run our business.

He appears to be following the advice in the SF Advertizing Age's September 2 article, "Verizon Catches Flak for Backing Rally Put on by Coal Producer: Local Sponsorship Undermines National Effort by Marketer to Establish Green Bona Fides," In it, author Rita Chang (email) interviewed Marc Hausman, president-CEO of Strategic Communications Group (who also blogged on being contacted for the story.) while Hauser says that

Any level of participation in an event as a sponsor, supporter or even attendee lends the credibility of your corporate brand to that event or cause

and that he advises clients to steer clear of emotional, hot-button issues, he says that in the current case,

They've already taken the knocks; if they pull back now, they risk making the other side unhappy.

Verizon thought it was a great idea to invest $1,000 in the rally and get to table at the anti-mtr Rally for America. I wonder if the notice the support garnered has given the company any second thoughts? Chang also wrote,

Verizon Wireless, which has been trying to establish its green credentials nationally, is finding itself in hot water with environmentalists blasting it for local sponsorship of a rally organized by a coal producer....

Massey Energy, which last year agreed to pay a $20 million settlement to resolve Clean Water Act violations at coal mines in West Virginia and Kentucky. The Environmental Protection Agency said in a release on its website dated Jan. 17, 2008, that the settlement was the largest civil penalty in its history levied against a company for wastewater-discharge-permit violations.

In the WaPo, Mufson explained that

Verizon executives also said they are reluctant to tell legions of local managers that they lack the authority to take initiatives. Verizon says that the West Virginia sales team saw this as a music event and marketing opportunity; after all, the throngs that show up Monday won't come because of the Waxman-Markey bill or speakers such as Lord Monckton, 3rd Viscount of Brenchley, who served as an adviser to former British prime minister Margaret Thatcher and asserts that human activity is not causing climate change.

Of course Verizon Wireless in WV is not the only local office siding w. the climate change deniers. Back in August Greenpeace released a copy of an email from the American Petroleum Institute (API) about its series of “Energy Citizen” during Congress's August recess.

For the first soiree in Houston, TX, Anadark Petroleum Corporation ponied up four buses for a start (with more, if there was a waiting list, and let its employees start loading at loading at 10:15 a.m. for 11:30 company picnic (er, rally) complete with free hot dogs and sodas at the venue.

And guess where the venue for that first rally was on August 10? Yup, you're right if you guessed Verizon Wireless Center. (hat tip to Kevin Grandia of the DeSmogBlog.) But seriously, Kevin, I'm wondering if that was at the actual company center or at the Amphitheater for which Verizon purchased naming privileges.
Posted by Beth Wellington at 5:55 PM