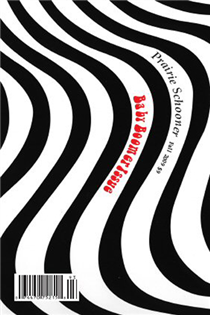 Cover of the Fall 2009 issue of Prairie Schooner.

I've know poet Grace Bauer (email, some of her poems) back from the time when she taught at Virginia Tech along side others such as Ed Falco, David Graham and Jeff Mann. Since 1994, she's been at the University of Nebraska-Lincoln, where she has stepped in for Hilda Raz (email, webpage) to edit the Fall 2009 issue of Prairie Schooner. 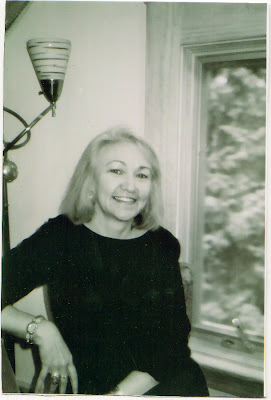 As she explains in an introductory essay, "Baby Boomer Issue(s),"

Maybe it was all the recent news stories about the very first baby boomers on the verge of retirement—and the warnings about the financial havoc this was bound to wreak upon Social Security and the national economy, which was already in pretty dire straits. Or the headlines, one after the other over the last few years, announcing that cultural icons ranging from Ginsberg's Howl to Motown Records to the peace sign—even the ever youthful Barbie—had hit the half-century mark. Maybe it was the ads for Barneys NY in a December 2008 New York Times Magazine, wishing the world a "Hippie Holiday"—complete with DayGlo-colored images of those fifty-year-old peace signs and a declaration that the store was "having a COUNTER-CULTURE moment" "remembering 1968 forty years on." Or the advance reviews in the Arts & Leisure section for the reopening of Hair on Broadway. Maybe it was because the daily reports on the wars in Iraq and Afghanistan were sounding vaguely like the reports on Vietnam more than thirty years ago (which is maybe why they are restaging Hair). Maybe it was the recent election of Barack Obama, which reminded at least some people of the election of JFK—not since then had they seen so much youthful exuberance and idealism so unabashed it even led to "an open apology to boomers everywhere" from Gen X'er Heather Havrilesky on salon.com, where she said "We're sorry for rolling our eyes at you all these years"—though she couldn't resist mentioning those of us who might be wearing socks with sandals or smelling like we'd "been on the bus with Wavy Gravy for the last three decades." Maybe it was just that, to paraphrase a boomer-era song, "something's in the air"—which is maybe just my own personal sense of "time's winged chariot" (disguised, perhaps, as Wavy Gravy's bus or a compact SUV) drawing nearer. But when Hilda Raz asked me once again to stand in as acting editor of Prairie Schooner while she enjoyed a semester of well-earned leave, and asked further if I might want to do some kind of special issue, I immediately said "Baby Boomers!" A bit self-serving, no doubt, since I'm a writer who was born in the midst of that boom, but I wanted to see what such a gathering might look like, and so I set out to see.

On line, you can find excerpts from the Fall issue:
There are also poems from her former colleagues Graham, Falco, and Mann, plus Naomi Shihab Nye, among others (contributors' notes). The blog for the magazine indicates there will be an interview with Grace about the Fall issue here.

And speaking of permalinks, due to magazine's method of assigning links, all of the above will be broken once the Winter 2009 issue comes out. But you can still find them by substituting in the url "archives/fall09" for "current". James Engelhardt, the magazine's managing editor wrote to let me know that he's passing on a suggestion to change the linking, but it's up to the IT guys at the College of Business Admin which hosts the site.

Posted by Beth Wellington at 3:02 PM