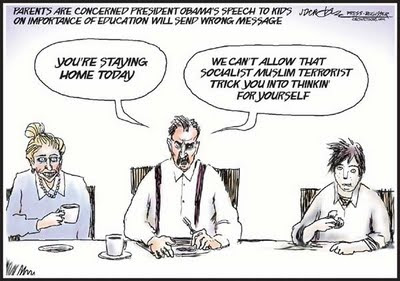 The White House released a transcript of this speech slated for today. It was a pep talk, nothing much controversial, with this ending:

So today, I want to ask you, what’s your contribution going to be? What problems are you going to solve? What discoveries will you make? What will a president who comes here in twenty or fifty or one hundred years say about what all of you did for this country?
Your families, your teachers, and I are doing everything we can to make sure you have the education you need to answer these questions. I’m working hard to fix up your classrooms and get you the books, equipment and computers you need to learn. But you’ve got to do your part too. So I expect you to get serious this year. I expect you to put your best effort into everything you do. I expect great things from each of you. So don’t let us down – don’t let your family or your country or yourself down. Make us all proud. I know you can do it.
Thank you, God bless you, and God bless America.

But a transcript and a mind speech weren't enough to quell the row and accusations of indoctrination, commented on by the BBC.

The Cato Institute wants us to understand the context for this:, while slyly calling the speech "politicized."

The furious reaction to the politicized lesson plan and Obama’s speech to schoolchildren cannot be understood without the context of the bailouts, the stimulus, the debt, GM, the attempt to take over health care.

And now, our kids. And not just the speech and lesson plan, but federal expansion into preschool and early childhood initiatives and home visitations (however voluntary and innocuous-seeming in different times).

They . . . the government, the meddlers, the nannies . . . they are coming for our money, our doctors, our guns and our kids. They won’t stop until they control everything.

That’s how it looks to millions of Americans. Fair or not, people are now very sensitive to any actions by the Obama administration.

Just as a lifetime of exposure to an allergen and modest immune reactions can reach some ill-defined tipping point and bloom into full-blown anaphylaxis, many Americans have developed an acute allergy to government intervention and Obama’s grand plans.

Which makes me wonder, just who is politicized here? Could there be some truth to this cartoon by Bill Schorr of Cagle Cartoons?

Count me as one who is furious about the bailouts the stimulus, the debt. But who started that mess, anyway. And, as for health care--if the insurance companies had done a better job, there would be no need for single payer, or it's way-weaker sister, the public option.

As Bill Clinton said in Esquire,

All we have to worry about is getting things done and doing them as well as we can. Don't even worry about the Republicans. Let them figure out what they're going to stand for. 'Cause as long as they're sitting around waiting for us to mess up, they don't have a chance.

Now, if he'd only talk to those Blue Dog buddies of his.
Posted by Beth Wellington at 11:34 PM