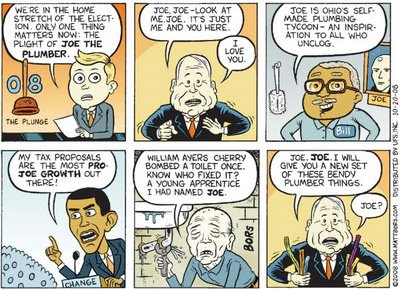 As conservative James Joyner of Outside the Beltway said in his analysis this morning, McCain is getting crushed in the polls.

Here's the transcript for the final debate tonight.

And in a bit of intrigue, ABC's Jake Tapper reports that the Obama team accidentally released his "talking points."

This is John McCain’s last chance to turn this race around and somehow convince the American people that his erratic response to this economic crisis doesn’t disqualify him from being president.

Not sure what the surprise is that Obama would be saying this.

And in Ohio, Cleveland's Plain Dealer's Reginald Fields reports that voter registration remains a problem in 2008, as a battle wages between the Republicans and the the Democratic Secretary of State, Jennifer Brunner:

More than 200,000 Ohioans who registered to vote this year for the first time or updated their voting information since Jan. 1 could be affected by the latest court ruling requiring the state to set up a new registration verification system by Friday, Secretary of State Jennifer Brunner said. Brunner said she would comply with the U.S. 6th Circuit Court of Appeals ruling late Tuesday but said she is deeply concerned that the decision is a veiled attempt at disenfranchising voters. The court's 9-6 opinion, written by Judge Jeffrey Sutton, suggested that voters whose driver's license number or Social Security number does not exactly match those found on databases maintained by the Ohio Bureau of Motor Vehicles or Social Security Administration could be required to use provisional ballots instead of conventional ones.

Posted by Beth Wellington at 11:22 PM