Yes, Virginia, there was no 6'4" Black man (and a bit about the C'ville Fall Festival) 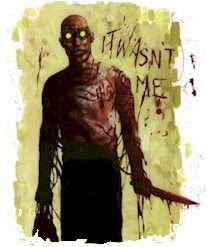 Illustration of The Bogeyman from Chapter 1 of the d20 Menace Manual by J.D. Wiker, Eric Cagle and Matthew Sernett (Wizards of the Coast, 2003)

In one of the oddest sidebars to the election, a Pennsylvania McCain campaign worker Ashley Todd, 20, has recanted her story to the Pittsburgh police that she was robbed at an ATM in Bloomfield the night of October 22 and that the suspect began beating her after seeing a John McCain bumper sticker on her car, then cut a backwards letter "B" in her cheek.

this incident could become a watershed event in the 11 days before the election.

If Ms. Todd’s allegations are proven accurate, some voters may revisit their support for Senator Obama, not because they are racists (with due respect to Rep. John Murtha), but because they suddenly feel they do not know enough about the Democratic nominee.

That struck me as an odd denial of racism. Why would an act, even if committed, by a black thug, reveal to folks that they don't know enough about one of the candidates. Moody went on to write,

If the incident turns out to be a hoax, Senator McCain’s quest for the presidency is over, forever linked to race-baiting.

For Pittsburgh, a city that has done so much to shape American history over the centuries, another moment of truth is at hand.

That seems hyperbole which shifts the blame. If McCain is associated with race-baiting, why not for for Sarah Palin's playing to the base (pun intended) with racially tinged innuendos warning that Obama would "pal around with terrorists." And while I'm at it, let me say, that I also dislike the way Palin's and McCain's comments on William Ayers smack of red-baiting.

At least Moody's piece is better than some of the screed from the right, as run down in today's The Atlanta Journal-Constitution post "The aftermath of Ashley Todd’s story" by Jay Bookman (email), a columnist and deputy editorial page editor, specializing in foreign relations, the environment and state and local politics.

In fairness, though, Bookman also should have credited conservative blogger Michelle Malkin, who today has the pleasure of writing, "I told you so." Although Malkin made the divisive comment on October 22 that most fake hate crimes were "perpetrated by liberals," she went on record as saying that the Todd incident "smells awfully weird," acknowledging that

there have been some shameful ...[fake hate crimes] on our side of the aisle as well.

Today, she instructs her readers,

Final lesson: Trust your instincts. Use your brains. Stop jumping every time Drudge hypes something in Armageddon-sized font.

She adds a caveat to those who don't share her political persuasions:

And those of you on the left who are now so interested in debunking despicable hate crimes might show a little more skepticism yourselves next time when similar narratives hit the news pages involving politically correct hoaxers who share your politics.

Skepticism is always good advice. I'd like to see it throughout the political spectrum. And I'll hope that Ms. Malkin holds to the same standard when she is helping to circulate memes which accord with her own point of view.

In other news, I am in Charlottesville this weekend staying at Rob and Sue's to attend the Charlottesville Fall Festival. Featured band is Crowfoot with caller Nils Fredland
Adam Broome (guitar, vocals), Jaige Trudell (fiddle), and Nicholas Williams (flute, accordion). Also staying with Rob and Sue are long time NC dancer Rod Edens, as well as Keith Gillis and Leigh Partington. Below you will find a photo Doug Plummer posted at Flickr of Crowfoot playing at the Scout House in Corcord MA. 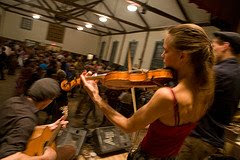 UPDATE: On October 28, Anil Dash (email) "What Sarah Palin Is Saying," an insightful take on how language is used.
Posted by Beth Wellington at 11:00 PM