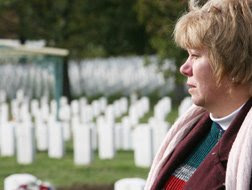 Image from the from the HBO site for its documentary on some of the families that come to visit the graves in Section 60, where soldiers killed in Iraq and Afghanistan are buried.

Jon Alpert and Matthew O'Neill... "embedded" themselves into the fabric of daily life in Section 60, capturing landscapes, families, friends and officials. Over the course of four months in 2007, they filmed on a daily basis, earning the trust of families who shared some of their most personal moments.

On October 10, Democracy Now interviewed Alpert on this his third film in a trilogy of Iraq-related HBO documentaries, which includes Baghdad ER and Alive Day Memories: Home from Iraq.

A May 18, 2007 photo essay on that section of the cemetary from the Washington Post is here.

Posted by Beth Wellington at 11:59 PM