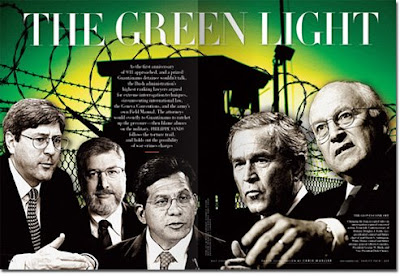 
I wrote on September 19 about the APA passing its resolution forbidding its members from participating in unlawful detention settings where the human rights of detainees are violatedure, such as Gitmo and elsewhere. After the organization initially seemed to be in delay mode, resulting in further protest, the APA president Alan E. Kazdin sent a letter October 2, to Mr. Bush outlining the resolution. October 10, Democracy Now featured an interview with psychologist Dan Aalbers, member of the the Coalition for an Ethical Psychology.

I had written June 17, 2008 about Senate hearings on the psychology of toruture and how Katherine Eban had broken the story in her special report in Vanity Fair July 17, 2007, “Rorschach and Awe.”

Phillipe Sands, a London international lawyer and professor's piece, "The Green Light," illustrated above, lays out detailed, extensive interviews, arguing high-level Bush administration lawyers broke their code of ethics and may be subject to criminal prosecution as were those tried at Nuremburg.

While he sometimes jumps to conclusions connecting the dots, he traces the lawyers' advice and their bosses' ’reactions, including a November 2002 “action memo” from Jim Haynes, general counsel of Defense Department, recommending “blanket approval” to 15 out of 18 proposed techniques of aggressive interrogation which Rumsfeld approved on December 2, adding “I stand for 8–10 hours a day. Why is standing limited to 4 hours?

Dr. Abigail Seltzer, a London psychiatrist, who treats trauma victims for the National Health Service and the Medical Foundation for the Care of Victims of Torture, provided that memo, a list of allowable techniques and the interrogation log for Mohammed al-Qahtani, which she had annotated as to " episodes of abusive treatment,…[examples where] the detainee’s rights were respected,…instances of medical involvement,…and 'expressions of distress.'” Her conclusion:

“over the period of 54 days there is enough evidence of distress to indicate that it would be very surprising indeed if it had not reached the threshold of severe mental pain.” The August 1, 2002 memo from the Justice Department’s Office of Legal Counsel by Jay Bybee, now a federal judge, and John Yoo, now at Berkeley, was not "an academic exercise in blue-sky hypothesizing, but rather played a crucial role in giving those at the top the confidence to put pressure on those at the bottom.

UPDATE: October 18, Newsweek posted anOctober 27 article, "The Biscuit Breaker: Psychologist Steven Reisner has embarked on a crusade to get his colleagues out of the business of interrogations, " by Dan Ephron.
Posted by Beth Wellington at 11:58 PM