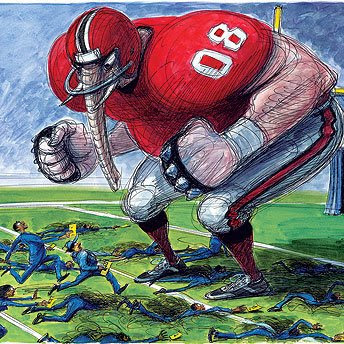 Illustration for "Block the Vote" in Rolling Stone.

Mark Niquette (email) of the Columbus Dispatch reports that the Ohio Secretary of State is under seige by Republicans in this battle ground state. Meanwhile, today Rolling Stone published a new piece on voter theft by Robert Kennedy Jr. and Greg Palast, "Block the Vote," which I submitted today (despite its October 3o byline) to NewsTrust with a successful solicitation for reviews.

that would have required Ohio election officials to set up new procedures to verify voter registration across the state in the weeks before the Nov. 4 balloting. The unsigned (”Per Curiam”) order is here. The order blunts an effort by the Ohio Republican Party to gain access to registration data that would enable it to challenge voters’ eligibility at polling places.

The state GOP had complained that the Ohio Secretary of State had violated her duty, under federal election procedures law, to share with county election boards the lists of voters whose names in a voter registration database do not match data in the state’s drivers’ license files. The GOP argued that the secretary of state had put a stop to required efforts to pass along the non-matching data so that local election officials could deal with it. Lack of matches could be the basis for challenges to individual voters.

The Supreme Court said it was not expressing any opinion on whether the state official had violated any duty under federal law. But, it said, it was not persuaded that the federal law gives a private party — like the state GOP — a right to go to court to enforce those provisions in the Help America Vote Act.