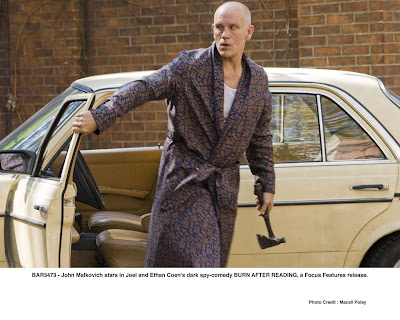 Photo of John Malkovich by Macall Polay in Burn After Reading, which I just saw at the Lyric.

John Malkovich plays Osbourne Cox, who quits his job at the CIA , rather than be demoted because of his alcoholism. (He tells his collegue, who is breaking the news, "You're a Mormon. Compared to you we all have a drinking problem. ")

As Osbourne sets out to write his memoirs, rather than seek gainful employment, his ice-queen wife, doctor Katie Cox (Tilda Swinton), wants to divorce him. She has already been kanoodling with Treasury agent Harry Pfarrer (George Clooney at his doofiest). At the suggestion of her lawyer, she copies Osbourne's personal and financial files off his computer onto a disc, which finds its way into the hands of workout trainer Chad Feldheimer (Brad Pitt). Feldheimer, a somewhat dim bulb with a savanst's skill with computers, figures out that the disc contains classified government information and along with his fellow trainer Linda Litzke (Frances McDormand), calls up Cox in the middle of the night with blackmail in mind to fund Litzke's plastic surgery. They intend to use the disc to blackmail Osbourne. Litzke wants the money to pay for cosmetic surgery, although her boss, Ted Treffon, (Richard Jenkins of The Visitor and before that the father in Six Feet Under) pines for her and tells her she's just right.

Osbourne, of course, is unreceptive. When blackmail fails, Litzke decides to take the information to the Russian embassy and convoluted Coen brother mayhem ensues. Peter Travers, a critic I usually find spot-on, has a review at Rolling Stone.
Posted by Beth Wellington at 11:31 PM