Wendell Berry: Speech Against the State Government (and MTR) 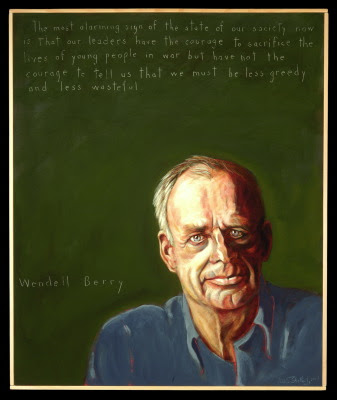 Portrait of Wendell Berry by Robert Shetterly for his project, Americans Who Tell the Truth.

Poet and essayist Wendell Berry was the big draw for a breakfast this morning at the Society of Environmental Journalist's final day of conferencing at the Hotel Roanoke. He chose to read his "Speech Against the State Government" first delivered on February 14, 2008 at the "I Love Mountains" protest in Frankfort, Ky.

Mr. Berry said during the reading that it was okay to reprint it, so I give it to you here in full. Here, too, after you finish reading is Mark Engler's piece from Grist on the occasion of Mr. Berry's seventieth birthday, August 5, 2004.

Speech Against the State Government


In 1996, when Ellen Davis, a scholar of the Bible at Duke Divinity School, was taken to a mountaintop removal site in Kentucky, she remembered Jeremiah:

If you take seriously the knowledge that humans are capable of neighborliness and caretaking, are capable of caring well for the earth for the earth’s own sake and for the sake of their neighbors now and yet to come, and if you know that according to our greatest teachers this neighborliness is expected of us, then you will grieve in knowing that we humans are destroying the earth. You will be offended in knowing that we are doing so with governmental approval and with governmental encouragement. If you are at all a normal human, you will find that hard to swallow. You may find it, in fact, a putrid lump that will gag you somewhat before you can get it down.

And yet to Kentucky state government, a wholly owned subsidiary of the coal corporations and of any other corporations that bid high enough, earth destruction is a normal economic enterprise. Earth destruction by strip mining has been an officially accepted practice in the eastern Kentucky coal fields for nearly half a century. In the Knott County Court room on the night of July, 15, 1965, confronting, as he had and would, the already catastrophic damage of strip mining that was going to get worse, Harry Caudill spoke of “the gleeful yahoos who are destroying the world, and the mindless oafs who abet them.”

Forty-three years later, bad has come to worse, and worse has come to worst, the gleeful yahoos still reign supreme in the coal fields, and the mindless oafs who abet them still hold dominion in Frankfort. This is not because money talks, as Sen. Mitch McConnell seems to think. It is because money votes, and money buys people who vote. It is because might, with enough money, does not have to worry about right. It is because, in the magnetic field of money, the flags and crosses on certain political lapels turn into price tags.

I must hurry to say that I am not talking about all Kentucky politicians. There has always been in this capitol a “saving remnant” of women and men who are not for sale. It is because of those people that we, the powerless, have never yielded to despair, but have continued to come here with the hope that at last this government will see the truth and do its duty.

Over the last forty years, with other powerless people, I have been here many times. We have come, moneyless into the magnetic field of money, trying to stop the mindless destruction of the land and people of our state. We have made our protests and our arguments, presented our facts, appeared before committees, spoken to those willing to speak to us. And virtually always we have failed. The destruction has continued. Nothing has changed.

Newly reminded of our political nonentity, we have gone home to await another chance to try again. Meanwhile the destruction has gone on. When I return from one of these tours of the capitol, if the Kentucky River is raised and running, I can see the land of our mountain counties flowing past my house. And I know that that river, vital to the future of our state and its economy, is seriously impaired at its headwaters and degraded in all its length by pollutants, and that the most powerful among us simply do not care.

What are we to do? Well, to begin with, there is no “we” that I can confidently speak for. I have been speaking for myself so far, and I will continue to do so.

Human nature, which I fully share, tells me that in the face of great violence it is easy to think of retaliatory violence. I reject that entirely. I do not believe in violence as in any sense a solution to any problem. I am willing also to take the further step into Scripture and say that we should love our enemies – or at least act toward them as if we love them.

The next temptation is to do as our enemies do, to say, “If they do it, so must we.” And I have in fact spent some time on the argument, which can be logically made, that Kentucky conservationists ought to start a fund drive and apply for grants in order to buy our fair share of state government. I reject that also. Even a good cause cannot justify dirty politics.

But thinking of that argument, I convinced myself of a proposition that is more difficult: If current governmental practice affords no apparent recourse but to become as corrupt as your opponents, you have got to become more radical.

Kentucky conservationists are not the first people to have to confront their own helplessness before an alien government. Others have done so, and you know some of their names. Mahatma Gandhi and Martin Luther King are two of them; there have been many others. Their solution to the problem of powerlessness is to make of powerlessness a power. The name of this solution is non-violent resistance or insistence, including civil disobedience. If your government will not rise to the level of common decency, if it will not deal fairly, if it will not protect the land and the people, if it will not fully and openly debate the issues, then you have to get in the government’s way. You have to forbid it to ignore you. You have to provide it with two new choices: either it must grant you the consideration that it rightfully owes you, or it must expose itself openly as a government not representative of the people but owned by the privileged few.

And here yet another temptation asserts itself. Why not wait until our cause becomes vivid and urgent enough, and our side numerous enough, to vote our opponents out of office? Why not be patient?

My own answer is that while we are being patient, more mountains, forests, and streams, more people’s homes and lives, will be destroyed in the Appalachian coal fields. Are 400,000 acres of devastated land, and 1,200 miles of obliterated streams not enough? This needs to be stopped. It does not need to be “regulated.” As both federal and state governments have amply shown, you cannot regulate an abomination. You have got to stop it.

Speaking for myself still, I will say that I don’t like the idea of resorting to non-violent obstruction, and I don’t feel very brave about it. It involves more time and trouble than I want to donate; the penalties can be unpleasant, and they can be much worse than that. Furthermore, as I am now out of patience with useless protesting and lobbying, I have no interest in useless civil disobedience. You are not going to catch me making a merely symbolic gesture. But I began my opposition to strip mining on that July night in the Knott County court room in 1965. I have been patient for forty-three years. And there are now enough of us who are concerned – there are enough of us here today – to require our government either to accept its responsibility or, publicly, and to its everlasting disgrace, refuse to do so. Surely the members of this government who represent coal corporations will be impressed by the tenfold increase in our numbers from February 14, 2007. Surely they will notice, more to their dismay, that many of this increase are young people.

If this General Assembly and this Administration give notice as usual that they are blind by policy to the ongoing destruction of the land and the people they are sworn to protect – and if you, my friends, all other recourse having failed, are ready to stand in the way of this destruction until it is stopped – then I too am ready.

Posted by Beth Wellington at 10:38 PM