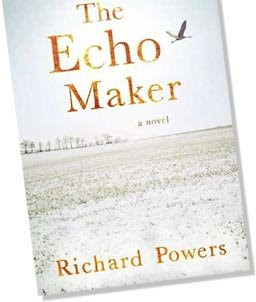 Cover of The Echo Maker, Richard Powers's 2006 novel from Farrar Straus Giroux (Now part of Macmillan. You can read his bio on his website. This is our reading group selection for October.

Powers sets this tale against the crane migration on the Platte in Nebraska, which ironically becomes more spectacular, as their habitat shrinks due to human encroachment. He tells the tale of Karin Schluter, reluctantly returning to her hometown to nurse her 27-year-old brother Mark, who suffers from Capgras Syndrome after flipping his truck in a near-fatal accident on a remote road one winter night.

As Mark emerges from a protracted coma, he believes that Karin is really an identical impostor, who shattered by her brother’s refusal to recognize her, contacts a cognitive neurologist Gerald Weber, famous for his case histories of brain disorder. Weber finds his own sense of being undermined and Mark, armed only with a note left by an anonymous witness, attempts to learn what happened the night of his acccident.

Margaret Atwood has an interesting essay in the New York Review of Books, parsing the novel's roots in The Wizard of Oz. There's a 2007 interview with Powers in The Believer.

My take is that although it's a compelling read on interesting material, Powers is too obvious in his efforts to impress you too much with his import. (Maybe it's the curse of being a Macarthur genious. I don't understand why The Echo Maker won the National Book Award in 2006. Compare that with the Man Booker winner for 2006, The Ineritance of Loss (Atlantic monthly Press)by Kiran Desai (New York Times review.) I've read both and there's comparison. Powers was also a finalist for the 2007 Pulitzer, which instead went to Cormac McCarthy for The Road.
Posted by Beth Wellington at 11:49 PM