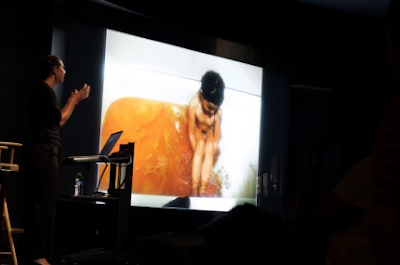 June 1, U.S. Capitol Police questioned Maria Gunnoe on child pornography when she brought to a photograph of a Kentucky young girl, Makayla Urias, bathing in a tub of brown water as part of her testimony on mountaintop removal before the House Natural Resources Committee.  Gunnoe had permission from both the child's parents Rully and Erica Urias and the photographer, Katie Falkenberg (shown above with her photo about her gallery talk showcasing her series series "Mountaintop Removal Mining: The Human Toll.")

The committee staff  had told Maria that a baby in bathtub photo was inappropriate and they will not let her show it. My first thought, when I heard the news shortly before the Congressional hearing was to start:  it's not the state of the child that's an obscenity, it's the state of the water she has to bathe in, after mountaintop removal mining (mtr).

Merriam Webster has an student dictionary that defines the obscene as something which is:

1 : REPULSIVE, DISGUSTING
2 : very shocking to one's sense of what is moral or decent


Sure sounds like mtr  to me.   Mountaintop removal mining has been called "strip-mining on steroids."  And yet the police--at the behest of Republican Committee members--question  Gunnoe about whether it's proper to show members of Congress such a  photo at a hearing on the EPA questioning the Spruce Run mtr permit? As a warning to my readers, a lot of the hearing was a gag-worthy dog-and-pony show for the coal industry, the Chamber of Commerce, et. al., by their minions in the House on their meme of The War on Coal.

The above illustration is mine adapted from stock photos.

The harassment of Maria Gunnoe is especially ironic, given the billboard I've written about that went up at a coal tournament sponsored by the Friends of Coal and the Pikeville-based Coal Operators and Associates,  denouncing Ashley Judd for standing up against mtr.  As you might remember, the billboard (for which no one would claim credit) included a semi-nude picture of Judd  accompanied by the slogan, "Ashley makes a living removing her top.  Why can't coal miners?"

Even the Democrats at the hearing kept on extolling natural gas as the replacement for coal.  Which made me think, "What the Frack?"  Yeah, just like those who would profit by uranium mining in Virginia and the nuclear industry tell us how THEIR energy is clean and safe.  When are we going to stop kicking the ball down the road and start working on efficiency and better alternatives such as wind and solar?

Fifty years ago, writing in The Atlantic, Letcher County Kentucky lawyer Harry Caudill called the more "benign" contour mining "The Rape of Appalachians." Five years later, then-West Virginia Governor Hulett Smith, echoed that phrase in talking about strip mining when he declared that "the rape of West Virginia has occurred."

While some fought for abolition of strip mining, Congress chose to pass the Surface Mining Control and Reclamation Act (SMCRA) in 1977. The results have led credence to author and activist Wendell Berry's warning that "you cannot regulate an abomination." Under that law, mountaintop removal has been allowed to go forward, ravaging more than 500 mountains and burying more than 2,000 miles of streams in Central Appalachia.  And then in 2002, as folks were winning lawsuits against mtr on the basis of the Clean Water Act, Bush gutted the act by magically changing mining waste into "fill."  Since then there has been a lackluster effort to pass the Clean Water Protection Act.  The latest iteration is H.R. 1375 (as everything starts over every two years with a new session of Congress.)

Kind of makes one wonder why Congress is not hearing of the extent of the destruction, when the story has been told eloquently by the likes of  Penny Loeb (for U.S News and World Report in 1997),  Michael Shnayerson (for Vanity Fair in 2006) and John McQuaid (for Smithsonian in 2009). And recent peer-reviewed studies have shown devastating health impacts; citizens near mountaintop removal are 50% more likely to die of cancer and 42% more likely to be born with birth defects compared with other people in Appalachia.

Over 150 citizens will be joining Gunnoe in DC to urge an end to the obliteration for the Alliance for Appalachia's Week in Washington. On June 4 - 6, they plan to meet with members of Congress to urge passage of the Clean Water Protection Act, H.R. 1375, as well as with officials at federal agencies charged with enforcing current laws to protect their health and land. Events will conclude with a  rally and national day of action to end mountaintop removal on Wednesday, June 6, starting at 11:00 a.m. at the Upper Senate Park at New Jersey and Constitution. The latter is a followup to Appalachia Rising, the September 2010 demonstration that resulted in 125 arrests.

If you're not coming to DC, you can still write your members of Congress in support of the Clean Water Protection Act.  And while you're at it, why not write the members of the  House Committee on Transportation and Infrastructure from your state.  If you're not a constituent, you can bypass the house email system (which will pretty much ignore you) by looking up the Chief of Staff for the Congressmember here in order to send a direct email in the form

Makayla's father, Rully Urias, has had to deal with the destruction mtr has wrought on land which has been is family since 1825.  He was quoted as saying three years ago,

I want a better future for my little girl, my wife and family and our community.”


I'd bet that was his intent--and that of Makayla's mother's Erica--when they gave permission for her picture to be taken and subsequently used...Do we really think that's coal's agenda?

Let's hope Congress can recognize what is truly obscene and put a stop the "rape of the Appalachians."

Posted by Beth Wellington at 9:15 AM