If Trees Fall in the Forest... 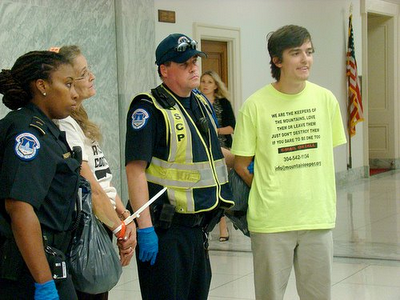 Scott Parkin, in DC to lobby Congress to put an end to mountaintop removal,  posted this picture yesterday to facebook.  He captions it "Standing Up For Tennessee's Mountains By Sitting-In" and writes, "Vickie Terry and Jack McNelis were arrested today for refusing to leave Rep. Duncan's office. Rep. Duncan refuses to acknowledge that mountaintop removal even exists in Tennessee."  This post was first published at 1:36 p.m. on 6/7/12 and last updated at 6:45 p.m. on 6/13.

*
Out of the  21 (or 22) arrests yesterday, at least six and probably seven occurred at the office of our own Ninth District's Morgan Griffith.  Another two were of folks sitting-in at the office of  TN's John Duncan.  So here are my questions:

If Jeff Goodell of Rolling Stone can take the time to write a piece which includes information on why are the media outlets in Virginia  and Tennessee running an AP piece by Dylan Lovan datelined Louisville KY?

There's plenty of material online if reporters want to cover yesterday's protest at Congressional offices to end the destruction of mountaintop removal.  Just got to twitter and search on the hashtags #endmtr and #Apprising.

I've  heard from both Vickie Terry and Jack McNelis that it's fine to use their picture, shown above, which wasn't part of the Appalachian Rising photo pool.  Press releases from Appalachia Rising included Terry's statement.


I told my Congressman that he should know better than to get between a mother and the safety and health of her children. I am so frustrated they continue to destroy our mountains and our health, and I would do anything to protect the health of my children and grandchildren.

McNelis just emailed me from a friend's laptop to add his own take on things:

It's disgraceful that congressman duncan shows such disrespect to his constituents and the health of tennesseans. he proved his cowardice to me personally by making up excuses for not meeting with us, accusing honest members of the communities in his district of being rude and making personal attacks at him when in actuality it was the other way around. our action isn't going to get through his thick head that he is allowing us to be poisoned but it may show the voters that he could care less how much he really cares about us.

The reason I ask is two-fold.

First, folks don't get arrested just so their friends will know.  They want to get a message out to the general public. I'm guessing those members of the public want to follow what's happening in  their own state. A Virginia (or Tennessee) headline with all the quotes about Hal Rogers seems a bit of a bait and switch.  And an AP story--especially one from out of state-- seems like what it is, an easy fix--better than nothing but...

In West Virginia, , as pointed to by Jeff Goodell, you'll find a  a podcast and transcript by Glynis Board of West Virginia Public Radio.  Board includes interviews with Dana Kuhnline and Maria Gunnoe, with most of the other information gleaned from a news release. Ken Ward, Jr., however, in his reliably enterprising fashion, has a piece up at his Charleston Gazette blog, The Coal Tattoo entitled "Rahall and coal:  What's a W. Va congressman to do?"

In Kentucky, Bill Estep of the Lexington Herald Leader took the time to not only write a story last night, but update it this morning. He includes an interview with KFTC's Canary Coalition organizer Kevin Pentz, who was one of the (non-arrested) folks sitting in at Rep. Hal Rogers of KY's office.  Estep also includes the results of calls he made to Roger's office and to the Capitol Police.

Could we use the eyes balls on that other story, please, to hold politicians accountable?

Brandon Hill's (website, email) video of Virginians occupying Griffith's office features Jane Branham talking about how folks were handed back the signs they tried to use to "redecorate"including, "We can't afford to buy our own politician."

The treatment of the current controversy is especially ironic if you remember the Dylan Lovan story on the billboard featuring mtr opponent Ashley Judd that went up at a coal tournament sponsored by the  Friends of Coal and the Pikeville-based Coal Operators and Associates.  The  billboard (for which no one would claim credit) included a semi-nude picture of Judd accompanied by the slogan, "Ashley makes a living removing her top. Why can’t coal miners?”

Here's how folks from all over can join the fight.

If you want to help you can click here  using your zip code to confirm the name of your representative. Then check to see if he or she is a co-sponsor of the Clean Water Protection Act..  If so, thank them.  If they are not, here's a script to ask them to sign up from the organizers at Week in Washington:


They also suggest that you add something personal.  Mentioning a local treasure that you would not like to see destroyed.  For instance you wouldn't want to blow up Mt. Rushmore for coal. Similarly, our mountains in Appalachian are a national treasure that the whole country must work together to preserve.

And you can actually become part of the Congressional Record through June 15, 2012

The Congressional Record is officially open through Friday, June 15, 2012 according to the Ohio Valley Environmental Coalition, where Maria works. As such, you can send an email via naturalresources@mail.house.gov  to the The House Committee on Natural Resources, its Chairman "Doc" Hastings, The Subcommittee  on Energy and Mineral Resources and its Chairman Doug Lamborn.  Ask for a public apology to the family of the young child in the photo, the photographer and to Maria Gunnoe, whom the committee detained for police investigation because she wanted the committee to see the photo of a little girl force to bathe in toxic coal pollution. Make sure you include this at the beginning, if it is to be included in the official record:


I wish to submit the following letter for the public Congressional record of the Subcommittee on Energy and Mineral Resources Oversight Hearing on Friday, June 1, 2012, at 10:00 AM, entitled “The Obama Administration’s Actions Against the Spruce Coal Mine: Canceled Permits, Lawsuits and Lost Jobs.”

You'll be in good company, as Lexington Herald-Leader's Editorial Board and the staff of the Goldman Environmental Prize.  In fact, you just might want to point that out in the letter, or  Jeff's article and/or any others that you've read.  If you need to find some articles, just Google (or Bing or DuckDuckGo "Maria Gunnoe + Katie Falkenberg."

Oh, and if you want to help just a bit more, why not add a comment at the posts and say what you've done and invite them to do the same.

Will you lend a hand? Trees are literally falling in Appalachia

They are being cut and dumped into valleys as part of the "overburden" that gets in the way of mtr mining.  That leads to flooding.  And the crushed  mountains dumped in the same valleys release toxic chemicals that poison the water , as shown that picture.

I'm not sure why mtr hasn't gained the traction of the Keystone pipeline, despite coverage by Goodell and others, but we need more than luck or the courage he writes about.

Scientific studies have shown we need to act now to prevent future destruction and to protect Appalachia for future economic opportunities.
Posted by Beth Wellington at 1:36 PM