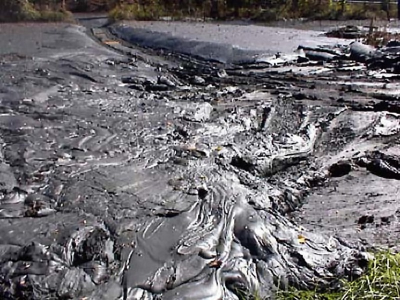 Photo of  the largest coal-ash pond in the United States – the 1,700-acre Little Blue Run impoundment site in Pennsylvania and West Virginia for FirstEnergy’s Bruce Mansfield Plant. I started this post on June 26, publishing it at 8:06 p.m.  At that time, I identified it as the start of a post.  "It's been a busy news day, given the fracking protest in Ohio. "  On July 3, I worked a bit to add information on the MACT vote, but  I have more work to do.  The last revision was July 3, 12 at 7:37 p.m.

June 19, the WaPost's transportation reporter, Ashley Halsey III (email, archive) filed his latest story on the transporation bill, saying that both Reid and Boehner want it finished by June 30.


Without a conference-committee deal by June 30, Congress will face extending funding levels set in 2005 yet again.

In an earlier story on June 13, he had reported how

The Republicans have linked three controversial non-transportation issues to the bill: expansion of offshore and arctic oil exploration, approval of the Keystone pipeline and relaxation of restrictions on use of coal ash.

Notice how all three have to do with environmental issues,  which the Republicans had not succeeded  in getting passed as stand-alone bills?  Actually, Halsey, who, after all is not an environmental reporter, didn't quite sum up the coal ash issue accurately to my lights. As Lisa Evans from the public interest environmental law firm EarthJustice explained in an email at 2:13 p.m. today, the proposed provision in the transportation bill:

I'm not sure about the hyperbole that EPA would be prevented from "ever issuing" safeguards.  Any  law can be reversed.  And surely, if this transportation bill does pass, those supporting the EPA will have their work is cut out for them.  And it will be a hard slog, if they can't get enough Senators to stand up to the House. I'm sure they're hoping for a repeat of June 19's Senate rejection of Inhof's attempt to limit the EPA's authority to regulate reduce mercury emissions at U.S. power plants through its MACT regulations.  The opposition claimed the EPA was to bankrupt coal plans, harking back to his supposed hidden interview on coal with the editorial board of the SF Chronicle that the paper's political writer Carla Marinucci (@cmarinucci) debunked with a transript and video on November 2, 2008, when it was sprung as a "November suprise" right before the election.

Senator Rockefeller courageously stood up to Big Coal, leading Politico to calling him a lame duck.  Virginia's senators Webb and Warner voted with the Republicans.

We don’t have much time. We are hearing a decision may be reached as soon as today.

Here's my letter to Senator Webb.  Since Webb is not running for re-election, I decided not to take him to task.

Since you are not running for re-election, first let me thank you for your service to Virginia and the nation. As your constituent, I am writing you today to urge that you protect the health and environment of your fellow Virginians and other Americans and oppose a coal ash amendment in the final transportation bill. This is a underhanded legislative maneuver from the allies of moneyed polluters who seek both almost-total constraint on the EPA's authority and special treatment that absolves them of their true cost of doing business.

The nation's attention has been focused on coal ash, ever since the TVA spill, which I wrote about here. Safe disposal of this waste is necessary for the public health and is an environmental justice issue. In nearly 200 cases in 37 states, coal ash has already poisoned water with arsenic, lead, selenium and other heavy metals. And we especially worry here in the New River Valley, where there is an unlined coal ash dump in the floodplain on the banks of the scenic New River, as reported on by Tim Thornton and which I've written about here. And we are not the only area affected. We've seen our fellow Virginians in Chesapeake become the subject of a 60 Minutes investigation of coal ash poisoning water the Battlefield Golf Course.

As you know, the coal ash amendment would prevent the EPA from enacting federal standards for the safe disposal of toxic coal ash. Please protect the public good, rather than siding with polluters.

I decided to confront Warner, however, although I tried not to antagonize him.

BTW, I heard back quickly, but only from Webb's Chief of Staff:

Thanks for your note. I shall share this with Senator Webb and Courtney Weaver, who handles these issues on the Senator’s staff.


Posted by Beth Wellington at 8:06 PM