Mr. Peabody's coal train wants to haul it away 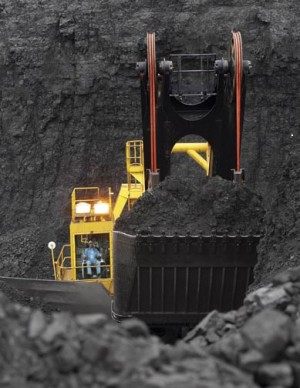 This photo  of mining in the Powder River Basin of Wyoming came from Peabody Energy (via Bloomberg).  I originally published this post on June 22, 2012 at 7:10 p.m. and last updated it at 10:45 a.m. on June 25, so that I could add this reference for you:  The Great Giveaway: An analysis of the United States’ long-term trend of selling federally-owned coal for less than fair market value by Tom Sanzillo (email), Institute for Energy Economics and Financial Analysis, June 25, 2012.

John Prine could have been singing about Peabody  in Wyoming in when he performed  his song "Paradise" on the January 2, 2010 episode of the Marty Stewart Show.


(2:00) And then the coal company came with the world's largest shovel
Well, they tortured the timber and they stripped all the land
They dug for their coal till the land was forsaken
And then they wrote it all down as the progress of man.

Of course, Prine was singing about Kentucky:


And daddy won't you take me back to Muhlenberg County
Down by the Green River where Paradise lay
Well, I'm sorry my son, but you're too late in asking
Mister Peabody's coal train has hauled it away

But, just as in Appalachia, Peabody and other big coal companies are hauling away parts of the West, using the Powder River Basin as a a sort of colony, from which it can strip mine taxpayer-owned coal and ship it to the lucrative Asian market. For this, you can thank the  U.S. Bureau of Land Management (BLM), which in 1990 moved to de-certify the the Basin as a coal producing region – even though it’s the source of almost half the coal mined in the US.

The de-certification means that on June 28,  2012,  BLM will “auction” an additional 721 million tons in the Powder River Basin (announced in the Federal Register on May 25).  And Peabody can again low-ball its bid knowing that it can just submit another one, should the BLM balk (ever so slightly.)

I say again because Peabody Energy  leased 402 million tons of coal reserves in five square miles adjacent to its North Antelope Rochelle mine in Wyoming, as the only bidder in an  "auction"  by the U.S. Bureau of Land Management (BLM) on On May 17, 2012.  The company paid $1.11 per mineable ton in a sealed "lease by application". It had previously bid just $0.90 per ton on February 29, which resulted in the "do-over."  In addition to the Peabody lease, BLM sold another to Arch Coal Inc., owner of Black Thunder Mine, the largest coal-mining complex in the world, according to the company's website.

On April 24, Congressman Ed Markey called for another  Government Accountability Office examination of the BLM’s coal leasing practices. Tom Sanzillo holds that , the BLM’s methods dramatically undervalue the coal, so much so that it has amounted to a $28.9 billion subsidy over the last 30 years. As early as 1984, subsequent to the controversial Powder River Basin coal lease sale of 1982,the Office of Inspector General (OIG) of the Department of the Interior found that the "reports and related investigative work were "inadequate and incomplete. Numerous leads were either dismissed or not pursued to reasonable conclusions, and serious discrepancies were never resolved."

On May 2, the Sierra Club and WildEarth Guardians filed in U.S. District Court in Washington, D.C., (Civ. No. 1:11-cv-00670-CKK) saying the federal Bureau of Land Management failed to consider the impact of greenhouse gases when 2 billions tons of coal is burned from four government mineral leases in the Wyoming portion of the Powder River Basin.

The environmental groups argue that the BLM broke federal laws and agency rules by neglecting to analyze fully the global impact of carbon dioxide and other pollutants released by power plants and want a federal judge to suspend the government's plan to lease and mine coal from the tracts at least until the BLM completes a supplemental analysis on the environmental impacts.

On May 10, Judge Colleen Kollar-Kotelly  dismissed the case without prejudice for lack of standing, adding in a further blow that she didn't have the purview to reign in the BLM's actions:

In a June 8 email, Frank Zaski, a retired Chrysler Manager in Franklin, MI, who is active with the Sierra Club analyzed the BLM's October 2011  "Record of Decision" for the Environmental Impact Statement (EIS) for Peabody's  North Porcupine Coal Lease Application (WYW173408 ):


In the North Porcupine EIS, the BLM stresses the US will need a lot of coal thru 2035 and they are only looking out for our future energy needs. Using dated assumptions, the BLM went out of their way to minimize the charge that leasing this track would contribute to climate change.

Zaski points out that while the BLM stated in its EIS that studies “were consistent in finding that coal-fired electric generation would represent 52-58 percent of the electric generation portfolio by 2030, as compared to the current 51 percent” and that "“coal use continues to be projected as the largest portion of the domestic electric fuel mix.”


Coal's share of total net generation actually dropped to 34% in March 2012. [according to the U.S. Energy Information Administration.]

He adds that while the BLM argued that denying the lease "would deny the mine operator the ability to compete with other operators in an open market for a future coal demand that is projected to continue until at least 2035," the agency


didn't mention that many PRB [Powder River Basin] mining companies already have up to a 30 year supply and big export plans.

He  questions the BLM statement that “the key determinant of energy consumption is population" and that "Fossil fuels and clean technology coal will have to be part of the mix if the U.S. is able to have enough energy in the future," asking


Why is the BLM leasing these rights as fast as they can? At the current (and declining) rate of use, the miners probably a have 40 - 50 year supply of coal in the ground. Is BLM selling these coal leases while they can before natural gas, EE, RE, EPA, increasing strip ratios and diesel costs really kill coal?

He points to  the BLM's website statement that its "managed land contributed more than $130 billion to the U.S. economy and supported more than 600,000 American jobs. The Bureau is also one of a handful of agencies that collects more revenue than it spends," stating,


[T]he BLM appears to think of themselves as a profit center on a mission.

I'd add that the BLM's mission is supposed to be, according to its own statement, to

sustain the health, diversity, and productivity of America’s public lands for the use and enjoyment of present and future generations.

We know about the impact of coal mining and burning on public health, not to mention how little is left after strip mining of public lands for us to use and enjoy. WildEarth Guardians’ 2009 report “UnderMining the Climate” found that over the last 20 years, only 3 of 21 lease by applications to mine coal on public lands had more than one bidder.

You'd think we'd want to lease to the highest bidder and reserve our coal for our own country's use, when nothing cleaner will do.  If we can't count on the administration or on the Courts, it would seem our last hope rests with a Congress, which to date has been too friendly to Big Coal.

BLM's  de-certification and current auctions make me wonder just how long we're going to let our government  help Mr. Peabody with his hauling.

Posted by Beth Wellington at 7:10 PM