Scott Walker Ahead in the Polls: Where's the DNC? 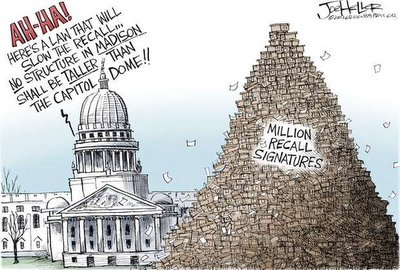 Cartoon, "Scott Walker Recall"  by Joe Heller (gallery, email, bio) for the 1/20/2012 Green Bay Press-Gazette, where he has been the editorial cartoonist since 1985.  Copyrighted and used by permission.

Wisconsin Governor Scott Walker, infamous for his embrace of the Koch brother's agenda, faces a  recall election, to take place June 5.  Despite the huge number of recall signatures, he's ahead in the polls , as reported by Politico and CNN, among others. One reason,  posits Alex Altman, TIME's Washington correspondent,  is lack of enthusisam for the Democratic party's candidate as being too much like Walker:

Tom Barrett, the Milwaukee mayor who will square off against Walker on June 5, was defeated by the governor in 2010 and advocated for some of the same changes to union benefits (including increasing the amount most public employees contribute to their pension and health care costs) as the governor.

Altman, who  graduated from  Northwestern University's Medill School of Journalism, also notes Barrett's vague platform.  I was reading his piece with admiration until I got to this example of opinion masquerading as journalism,

Most of  Altman's  column-inches are spent on describing colorful, but ineffectual citizens. My question, unanswered, is why did the experienced (and paid)  organizers behind labor's campaign for Falk fail to  succeed in mobilizing engaged citizens for its candidate.Was there a better candidate? Or was it just that United Wisconsin--which spearheaded the recall--didn’t endorse a candidate in the Democratic primary, due its non-partisan status?

Is United Wisconsin's really only interested in "citizen engagement rather than electoral results?"   I'm not so sure about Altman's analysis since the website for United Wisconsin has a statement for its Political Action Committeethat its state purpose is to oust Walker and his Lt. Governor.

Altman describes labor as "tepid" and "depleted" and  Democrats as "fractured," "Balkanized" and "careening,"


unable to drive a consistent message, careening from collective bargaining to Walker’s purported dishonesty, the “war on women” and jobs and education.

Meanwhile, he fails to react to the largest newspaper in the state endorsement Walker, claiming that

Either it's a single issue or not.  The paper has disregarded United Wisconsin's statement by its Executive Director,  Director Lynn Freeman that


Our supporters have identified issues critical to Wisconsin’s future, including family-sustaining job creation, quality education, access to affordable healthcare, and the effect of big money in Wisconsin politics. United Wisconsin will focus on these issues.

If Walker should win, won't that just embolden him and his supporters--many out of state? And is everything over after the election, as Altman would have us believe?


After nearly 15 months, the daily solidarity gathering in the shadow of the capitol will stop meeting the week of June 5.

Altman has disregarded United Wisconsin's statement that it  will continue its fight:


[T]he people of Wisconsin have shown that democracy is not a spectator sport, and the days of passive participation in Wisconsin politics are over....[We are] committed to being a vehicle for citizens to shape Wisconsin’s future...

Also of concern is Altman's report of


DNC’s tentativeness about plunging into the contest, which Republicans attribute to fears that a loss would tarnish President Obama’s chances...

Did Altman check with the DNC or at least the Wisconsin Democratic Party.

And if the DNC can't take down Scott Walker, what good is it?  I'm wondering:  is it too late to win the recall or will the many folks who signed petitions manage to rally enough fellow voters to "throw the bums out of office."

UPDATE:At 5:21, the AP's Scott Bauer, who filed at 5:21 p.m. according to newsvine, answered some of the questions I raised. Bauer quotes Wisconsin Democratic Party Chairman Mike Tate as saying,


We are, internally, seeing things start to move in our direction in a very substantial way...Democrats have prepared a 'huge, well-funded' turnout operation that will deliver more votes to Barrett than he received in the 2010 governor's race...


The Democratic National Committee said Monday it has sent $1.4 million to Wisconsin in the 2012 election cycle and is tapping its organization to turn out votes for Barrett.


DNC Chairwoman Debbie Wasserman Schultz plans to host a fundraiser for Barrett on May 30. Another Democratic heavy hitter, former U.S. Sen. Russ Feingold, whose spokesman said has already raised $50,000 for the campaign and worked to get Democrats to vote early, is also hosting a Barrett fundraiser that day.

See my comment at the version the WaPo ran, for some reason w.o. Bauer's byline.  I also raised my questions at TIME.

Posted by Beth Wellington at 4:00 PM