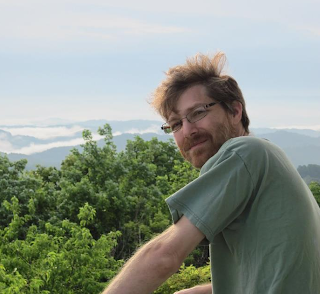 Photo of Chris Green from his fb page, taken by his wonderful wife (and  preschool teacher and GIS consultant) Jenny Hobson (blog) at Pipestem, WV.  (used by permission)

Chris currently is associate prof of English at Marshall University and co-director for the Center for the Study of Ethnicity and Gender in Appalachia (CSEGA). He is the Vice-President (and president-to-be) of the Appalachian Studies Association. By way of disclaimer, Chris edited Coal: A Poetry Anthology,  in which one of my poems appeared, as well as an issue of Wind on work from the Southern Appalachian Writers Cooperative (ditto).

Chris had his  dissertation  published in 2009 by Macmillan as The Social Life of Poetry: Appalachia, Race, and Radical Modernism,  in which he looks at the idea of "Anglo equality" and focuses on the work of Jesse Stuart (Man w. a Bull Tongue Plow, James Still (Hounds on the Mountain ), Muriel Rukeyser (U.S. 1 ) and Don West (Clods of Southern Earth ).  I should add that this book won Berea College and the Appalachian Studies Associations's Weatherford Award in 2009 for a work of non-fiction that "best illuminates the challenges, personalities, and unique qualities of the Appalachian South."   He shared the award that year with KY writer C.E. Morgan for her first novel, All the Living (Farrar, Straus & Giroux--which btw netted Morgan a 2010 Lannan Literary Fellowship and recognition by both the National Book Foundation for the 5 under 35 award and The New Yorker magazine as one of America’s 20 Best Writers Under 40.)

His book of poems Rushlight  was published by Bottom Dog Press. 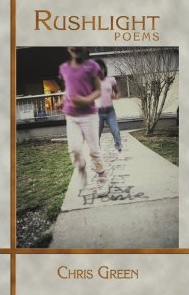 Chris is the one who got me involved in OVEC when he invited me to join in the WV Mountaintop Removal Writers tour, along with folks such as Jeff Mann, Katie Sallitt Fallon, Eddy Pendarvis,  Diane Gilliam, Denise Giardina, Irene McKinney, Bob Henry Baber, Laura Treacy Bentley, Sam L. Martin,  Rob Merritt, and Cat Pleska.


BTW, the wonderful Silas House has been serving as interim director and will return to his position athe NEH Chair in Appalachian Studies. Chad Berry, who sent me the announcement of Chris's selection, writes, "Silas has greatly increased student engagement in the Center and brought a number of high-quality programs to Berea."

I'll add some more links later (to pages for the other writers I've mentioned in this post.

Oh, and in case you haven't heard of the Weatherford Award, Chris is in VERY good company.  Fellow winners include If you're still not impressed, other recipients of the Weatherford Award include:
Special Weatherford awards for a body of work have gone to the likes of  Robert Coles, M.D, Wilma Dykeman,  Jesse Stuart, Harry Caudill, James Still, Harriette Arnow, Cratis Williams, Albert Stewart,  Loyal Jones, Sidney Saylor Farr and Jerry W. Williamson.
Posted by Beth Wellington at 2:22 PM