Jack Wright: Memorial Day: Thinking of the Ones I Knew From Home 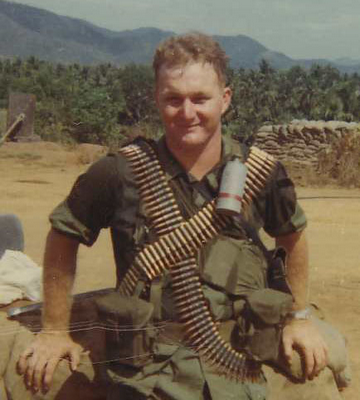 I may not be online tomorrow and want to post something for our veterans. This piece is written by my friend filmaker Jack Wright and used by permission:


This Memorial Day weekend I'm thinking of the ones I knew from HOME. Lost, all these years gone but not forgotten Danny Mullins and Scott Dotson from Pound, Virginia, and from Wise, Don Stallard, Don Buchanan, Carl Dingus, Michael Hopkins and Marvin Wyatt.

And the boys from my unit, the First Cavalry Division too numerous to name here. All their names are on the long black wall at the Vietnam Memorial with the other 50,000 US soldiers not to mention the ones who came home and later died of psychic injuries resulting in suicide, or agent orange. Lord forgive us. Bless our troops, our dead, AND damn the Masters of War.

"You that fasten all the triggers for the others to fire
While you sit back and watch while the death count gets higher
You hide in your mansions while the young people's blood
Flows out of their bodies and is buried in the mud...
And I hope that you die and your death'll come soon.
I'll follow your casket on that pale afternoon
And I'll watch while your lowered
Down to your deathbed
And I'll stand over your grave till I'm sure that your dead."

(Masters of War by Bob Dylan)

Here's another piece, Jack sent me: "Decoration Day memories for Hindman." Decoration Day is what I first heard it called when I was a boy growing up in Wise County. I knew it was a holiday, but I did not fully understand how or why it was celebrated. I remember gazing up on the hill that overlooked Wise's main street and seeing flowers and flags decorating certain graves in the town cemetery. My Aunt Nell Elliott explained respectfully that these graves were the war dead. She went on to say that our family was somehow lucky. Her brothers and uncles and grandfathers had all been in wars dating back to 1861 but God had spared their lives. As I grew older the name, Decoration Day, seemed to vanish, replaced by Memorial Day, but the stories associated with it remain vivid.

At a family reunion in 1976, my cousin Ruth Maxwell--the family genealogist and historian-- told a story about our great-grandfather, Charles Barker, who had served in the Civil War. His Confederate unit was guarding Cumberland Gap and their position was under attack. Federal troops charged up the hill from the Kentucky side. As the Confederates were about to be overrun, my grandfather jumped up and shouted, “Don’t shoot, I’m a Whig! I’m a Whig!” This so startled the oncoming platoon that “Grandpap” and his comrades escaped back into Lee County, Virginia, where most of them lived. From then on my cunning old great grandfather went by the nickname of “Whig”-- the name he carried to his grave in 1925, a site decorated by a Civil War marker. My family has continued to be lucky.

None of us were lost at war. I returned safely from Vietnam in 1967. I’ll miss coming home for Decoration Day this year to visit gravesites with family and friends. But I’d like to mention several Wise Countians from my generation who died in Vietnam, some of whom I was fortunate enough to know personally as we grew up.

On the U.S. National Park Service’s Vietnam Veteran’s Memorial seventeen are listed from Wise County, among 1,304 dead from Virginia and 58,178 nationwide. Of course, there are others who come to mind. There are those who died after returning from war. The effects of the war were often hidden deep inside, resulting in later suicides or other self-destruction. The forgotten. They died from war just the same but are not mentioned in any official lists and are not celebrated in the same way.

After seeing the recent Vietnam movie, “We Were Soldiers,” I visited the Vietnam Veteran’s Memorial Wall website and discovered a most fitting tribute written on September 11, 1999 by a veteran who served with the late Danny Mullins of Pound. Dale R. Sabine had posted a message in honor of his fallen leader. He said, “Daniel Lee Mullins was a brave officer, I was the last one to talk to him. He saved my life in the Soui Cat ambush. I was talking to him when the mine went off, I was the only one of five to walk away. One other lost his legs but survived. [Lt. Mullins] was a credit to his rank, and one of the finest men I ever served under. He had no fear when it came to his men, always there when needed. I carry him in my mind and heart to this day, and forever until we meet again. God bless you brother, I didn't have a chance to say goodbye before you were gone. One minute we were talking, then you were gone, for some reason God spared my life. My mind relives it every day and I find no rest. God bless you Daniel Lee Mullins, my brother, rest in peace.”

This Memorial Day we pay respect to the dead and honor them all equally. Indeed, we miss them all. Rest in peace, brothers and sisters. Amen.

The Vietnam Veterans Memorial Wall Page is dedicated to honoring those who died in the Vietnam War. Since it first went on line in 1996 it has evolved into something more. It is now also a place of healing for those affected by one of the most divisive wars in our nation's history.(http://thewall-usa.com)
Posted by Beth Wellington at 7:11 PM