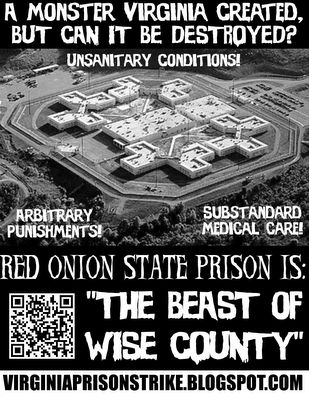 Author's note:  I am waiting for promised photographs and video from today's  rally.  I originally posted at 11:55 am, before I left for Roanoke and then started and update.  Instead, I've posted a graphic from The Wingnut.  BTW, I have another post on Red Onion and how Joe Giarratano was imprisoned there here.

It would have been nice if the Western Regional Office of the Virginia Department of Corrections had not locked up and hidden behind closed blinds.  That was the staff's apparent response when at 1 p.m. on Friday May 25, about 20 folks from Solidarity with Virginia Prison Hunger Strikers showed up at 5427 Peters Creek Road in Roanoke, Virginia.

It would have been nice if Regional Operations Chief, G. K. Washington was coming to the phone, or if "Heather," whom I got when I dialed "0" hadn't answered (over and over again) that I needed to call Richmond and speak Larry Traylor, Director of Communications, even after I told her that Mr. Traylor was also not answering his phone.  Of course "Heather" gave her name.  The first operator I had called when I asked for Mr. Washington and was told to call Mr. Tralor,  told me she didn't have to tell me her name.

Finally the protesters decided to  read their list of ten demands on behalf of the hunger strikers in two units at Red Onion State Prison, Pound, Virginia in Wise County.

The Richmond Times Dispatch calls Red Onion "Virginia's toughest prison."  The "supermax" isolates inmates for 23 hours a day in solitary confinement.  It has has long been a topic of attention in Virginia and beyond.  In 2000, a Roanoke Times investigations of the Wallens Ridge and Red Onion state prisons revealed that guards at both supermax facilities used excessive force in dealing with inmates and that inmates at these facilities receive poor medical treatment.  By 2006,  Laurence Hammack (email) was saying nothing much had been done.


In the late 1990s, then-Gov. George Allen (R), now a U.S. senator running for re-election against another former governor, Tim Kaine (D), had a get-tough corrections policy that resulted in the abolition of parole and the lengthening of criminal sentences. He also went on a prison-building tear that included the construction, including two "supermax" (or level S facilities for their maximum-security features) to house the supposed expected flood of violent offenders. A surplus of cells resulted, which were then rented out to other states with overflowing prisons, resulting inappropriate incarceration of low-threat offenders from urban areas.

Both of the intended supermaxes--Wallens Ridge in Big Stone Gap and Red Onion--are in Wise County, where local residents in Southern Appalachian Mountain Stewards (SAMS) and their allies have been fighting against mountaintop removal and the construction of the coal-fired Dominion electric plant. Wise Country officials (and probably those from surrounding areas--I need to look up the information) plagued by the mono-economy of coal, actively lobbied for them, seeing them a source of jobs. Wallens Ridge has now been classified as Level 5, rather than S according to the DOC.

Originally   Harold Clarke, director of the Virginia Department of Corrections, took the attitude of "hunger strike, what hunger strike" when interviewed, but having just returned from the rally, I can tell you that Anita Kumar of the Washington Post is writing that he just admitted the strike exists for the first time. I hope to interview those rallying.  I also hope to interview DOC officials and families of the strikers (if I can locate them) as well as documentary filmakers at Appalshop who have reported on the prison in their film, "Up the Ridge." In addition I would interview Jamie Fellner, a senior adviser for the New York-based group, Human Rights Watch, which investigated conditions at Red Onion, and wants access to the prison and to meet with Clarke, the Red Onion warden and prison inmates. Fellner specializes in U.S. criminal justice and prison issues, including segregation and isolation, and wrote a highly critical report in 1999.

Feller told the Times-Dispatch that "complaints about cleaning supplies are one thing, but 'I am concerned and was troubled to hear (allegations that) they have indefinite segregation without clearly defined ways for inmates to work their way out.'"

Supporters say is a protest over alleged abusive conditions there and announced 10 inmate demands that range from an end to indefinite terms of segregation to better materials for cell cleaning. They say that the strike began Tuesday and as of Thursday, as many as 40 to 45 prisoners scattered in segregation pods are participating in the hunger strike.

Harold Clarke, director of the Virginia Department of Corrections, told the Times Dispatch on Thursday that the inmates began turning down meals Tuesday but have not explained why: "We are not strangers to hunger strikes." He also said that he would be glad to speak with Fellner but that he had concerns about her meeting with inmates. "We don't want to interject any controversy or do anything that gives the offenders the impression that it's OK for them to act out in the way they are....We want them to feel the responsibility to comport themselves appropriately." He also contradicts Fellner, saying,"There has always been a way for them to get out...Quite frankly, I'm not sure what they're concerned with because the things they have listed are all things that we are satisfying."

Some background: The Appalshop documentary "Up the Ridge" from  The Virginian-Pilot (Norfolk, VA).  On  October 7, 2006, Bill Sizemore wrote the film

focuses in part on the deaths of two Connecticut inmates, a 20-year-old drug offender who apparently hanged himself and a 50-year-old rapist who died after being zapped repeatedly by guards with a stun gun. Beyond that, the film examines the effects of the distant mountaintop prisons on inmates' families. At one point the camera crew rides along with the Watson family of Newport News, who rented a van to visit their relative in Wallens Ridge. The 10-hour, all-night trek drives home the isolation those prisoners endure. "There's no bus service. There's no airport. There's no train service. There's no cab service," said Szuberla. "So unless you have a vehicle and the will to get out here, it's pretty tough." The filmmakers got only limited cooperation from the state Department of Corrections. They interviewed the director, Allen appointee Ron Angelone, in his last week on the job in 2002 but were not allowed to tour the prison or talk to wardens or guards, even off duty.


According to Sizemore, Clarke said,

The inmates at Red Onion earn their way to Red Onion. They are individuals who either are notorious criminals or they were so disruptive in other institutions that they earned their way there." He claims that most will someday leave prison, and inmates are given chances to earn their way back to less closely controlled prisons. "We don't want anyone — if we can avoid it — leaving Red Onion straight back into the community."