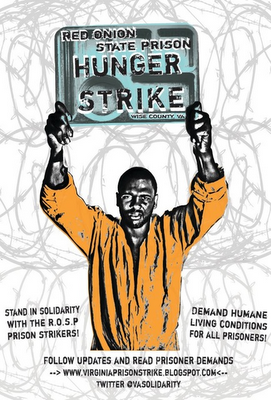 Another graphic from the Red Onion Hunger Strike, this one from SF Bay View.

This morning, The Washington Post's Anita Kumar reported in the Virginia Politics blog  that Department of Corrections officials at Red Onion stated that as of Saturday no prisoners were refusing meals.  I have my doubts and will be interested in hearing what the solidarity group reports.  If their statements contradict the DOC, I hope she will follow up.

I wrote about Red Onion on Friday and talked that day to Roanoke Times journalist Laurence Hammack who had written extensively about abuses at the Red Onion. This afternoon Hammack sent me a copy of the first story he wrote on on the supermax "back when it opened in 1998. More to come..."

In looking to see what might be available already at the paper's online archive I stumbled on a brief 2006 article on Joseph M.Giarratano, whose death sentence had been commuted in 1991 by then-Virginia Governor L. Douglas Wilder.  The former scallop fisherman, pleaded guilty to capital murder in the strangling of 44-year-old Barbara Kline and the raping and stabbing of her 15-year-old daughter Michelle in the Klines' apartment, which he shared with them in Norfolk. His conviction was based on circumstantial evidence and his own confessions, which he later recanted, saying he had awakened from a drug-induced sleep on the  couch, discovered the bodies and assumed he was the killer.

Giarratano and his lawyers later sought biological evidence such as vaginal and cervical swabs that were lifted from the victims' bodies, arguing that DNA tests of that evidence could exonerate him as they have others convicted of decades-old crimes, but authorities maintained that the biological evidence in the case was destroyed years ago.

Joe had ended up at Augusta Correctional Center after then-governor  Virginia Gov. L. Douglas Wilder commuted his death sentence ---within  36 hours of execution--without explaining why.  Later Wilder would say that he was troubled by Giarratano's inconsistent confessions to police. Joe had set up the peace education program for the other inmates with the help of former Washington Post columnist Colman McCarthy, the founder of the Center for Teaching Peace.

Then-Attorney General Mary Terry turned down Giarratano's request for a new trial, even though it would have made him vulnerable to a second death sentence. The Department of Corrections closed his peace studies program at Augusta Correctional Center in  1995, then sent Giarrantano on to the mental health unit at the Powhatan Correctional Center and from there to the Buckingham and then Utah and Illinois before he ended up back in Virginia at Red Onion.

I actually got to meet Joe Giarratano at Augusta Correctional Center 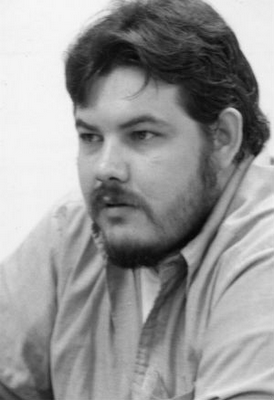 This above photo  shows Joe as I remember him.  The year was about 1992, when I was writing for the New River Free Press.  I've worked in corrections and met some scary folks, but Giarratano was not one of them. He had a bit more swagger than the typical peace activist--probably necessary to hold his own in the prison population--but he was articulate and had maintained a sense of humor.

Joe hardly fit  Lt. Perry Ratcliff description to visitors touring the Wise County prison at the time of its opening, as cited by Hammack:

Of course, Joe Giarratano had been a thorn in the side of the Virginia Department of Corrections for his high profile.

Giarratano is now at Wallens Ridge, but  time in SHU has left its toll

Here's a more current photo from of Joe, which accompanies his handwritten letter, which you can find posted--along with a transcription--on the site of the Virginia American Civil Liberties Union. 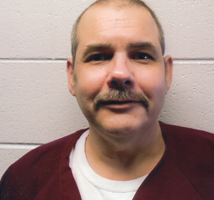 My 8 years in SHU made me less sociable. I get extremely uncomfortable being around or in groups of people. I have experienced panic attacks in these situations. Since being released to g.p. [general population] and transferred here to WRSP [Wallens Ridge State Prison], I have probably gone to the mess hall 6 - 10 times in 5 years, I can’t tolerate the crowd, being locked in that small space with them and being that close. I survive by eating out of the prison commissary: p- butter, crackers and ramen noodles. Seriously. I generally do not initiate conversations. I do respond if someone speaks to me. I have become much more of an introvert. Depression remains a problem.

The psychiatrist at Red Onion was responsible for getting me out of SHU and transferred. Initially I was placed in a “progressive housing unit,” but not in a double cell as was the routine. I was placed on single cell status for almost a year before I transferred to WRSP general pop.

If solitary confinement can so damage a person such as Giarratano, imagine its effects on a psychologically weaker, more isolated prisoner.

Boston psychiatrist and authority on solitary confinement Stuart Grassian would not be surprised by the changes in Giarratano.  He writes that isolation “often results in severe exacerbation of a previously existing mental condition or in the appearance of a mental illness where none had been observed before.”  Grassian argues that supermaxes produce a syndrome characterized by “agitation, self-destructive behavior, and overt psychotic disorganization.” He  notes memory lapses, “primitive aggressive fantasies,” paranoia, and hallucinations.

Most scholars concerned with solitary confinement agree. Peter Scharff Smith of the Danish Institute for Human Rights writes, “Research on effects of solitary confinement has produced a massive body of data documenting serious adverse health effects.” Those effects may start within a few days, involve as many as three-quarters of supermax inmates, and often become permanent.

Jamie Fellner is a senior advisor for Human Rights Watch who has spoken out about prison conditions during the recent hunger strike.  She outlines how the basis for assignment to Red Onion differs from accepted correction's practice in her May 1, 1999 Human Rights Watch report, "U.S.: Red Onion State Prison: Super-Maximum Security Confinement in Virginia."  You can find her footnotes at the link.


...corrections professionals know that many-perhaps most-inmates who have been sentenced to long prison terms even for violent crimes are not management problems. (Indeed,most inmates in prison systems are well-behaved; they want to do their time and get on with their lives.) The usual practice in many jurisdictions is to place inmates in the general population of maximum security facilities if they have been convicted, for example, of murder and have life sentences. They are then reclassified after a year or so, and depending on their behavior may be transferred to less restrictive facilities.


The decision to use length of sentence as a basis for assignment to Red Onion is particularly difficult to justify in the case of inmates who were already behind bars before Red Onion opened and who have demonstrated by their actual behavior that they are not violent or difficult inmates requiring the extensive controls of a supermax.

Yet we have received various complaints from inmates in just this situation. One inmate with a life sentence, for example, had spent six infraction-free years in prison only to be transferred to Red Onion. One inmate told HRW that he was sent to Red Onion even though he had a classification score of eighteen and had gone years without any infractions. Another said he had been behind bars for twenty years on a life sentence and had no record of violent conduct, yet he too was sent to Red Onion. Another inmate told HRW he was sent to Red Onion even though he had an “impeccable” institutional record. When he asked DOC personnel why he had been transferred “they merely told me because of the length of my sentence (life plus fifty years) and also because I was an ‘in-fill’ inmate. In other words, they did not have enough assaultive disruptive inmates in the prison system to fill Red Onion. They have lied to the public about the need for these prisons in Virginia.”

Red Onion seems to be a case of "build it and they shall come."  Fellner explains,


That Virginia does not have enough inmates who have displayed dangerous conduct to fill Red Onion and Wallens Ridge should come as no surprise. Virginia has never had a particularly violent inmate population. In fiscal year 1997, the DOC had only 72 assaults on staff and 86 on inmates out of a total prison population of 28,034.The total beds at Red Onion and Wallens Ridge constitute 6 to 8 percent of Virginia’s projected prison population.We are not aware of any DOC analysis that indicated such a high percentage of the state prison population could reasonably be expected to need super-maximum security confinement.

On January 1, 1997, for example, Virginia had 852 inmates in administrative segregation, or 3.5 percent of its total prison population. Before Red Onion opened, the DOC retained a national expert in classification systems, James Austin, to undertake a classification review of its prison population. The study analyzed such factors as history of institutional violence, severity of current and prior offenses, escape history,and institutional disciplinary records.The study showed that while a relatively large number of Virginia inmates have been convicted of crimes that earn long sentences (in large part because of the abolition of parole), few engage in institutional violence or escapes. According to Mr. Austin, “Virginia does not have a prison population with high levels of assaultive behavior. It is the length of sentences that gives Virginia its high proportion of maximum security inmates.” Austin’s analysis showed that only .9 percent of male inmates who had been in prison a year or longer had prison histories of assault and battery with a weapon; only .7 percent had escape histories. Only 1.6 percent would be reclassified to maximum security because of institutional misconduct (as opposed to other factors such as severity of commitment offense).