Marissa Alexander: Inequal Use of Gun Laws in FL 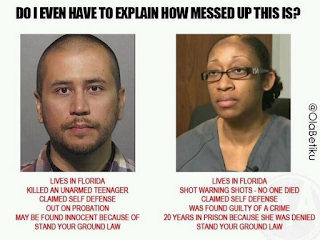 Poster by Ola Betiku used by permission with a H/T to Ash-Lee Woodard Henderson.  This appears to be an adaptation (or vice versa) of an illustration on the blog, Stand Your Ground for Marissa.  As a fellow editor at NewsTrust notes, the poster is inaccurate in stating that Zimmerman (l.) is out on probation.  But that inaccuracy does not negate the question the poster raises.

You've heard plenty about Florida gun laws when it comes to George Zimmerman, in parts thanks to organizing by Martin family lawyer according to AP reporter Mike Schneider, but have you been reading about Marissa Alexander, the woman pictured on the right in the above poster? Saturday, when I saw it on a friend's page on facebook, I had to turn to Google to find out whether Alexander's was a recent case.  In fact, it turns out that she was sentenced on May 11.  The comparison of how Florida is treating Zimmerman and Alexander is startling.

I'll be adding facts on the case later., but for this first entry I want to talk about how news gets covered. It's not that there hasn't been anything about Alexander as I search at 5:30 p.m. on May 19. Contrast 435 primary entries on "Trayvon Martin" v.s. 551 for "Marissa Alexander" + gun (because there are other folks w. the same name including this young woman, whose name comes up before some of those for the case in point in a google search.)

Subhash Kateel has had sustained coverage on Let's Talk Radio since April 18.  Novelist Anna North, whose day gig was at Jezebel and is now at Buzz Feed posted April 23 on the facts behind the "Reverse Trayvon" case.  Aaron Morrison was on the story by at least April 26 for Loop21.  Anderson Cooper--to his credit--televised an interview April 27.Trymaine Lee, senior reporter at Huff Post covering national stories which impact the black community started writing about Alexander in early May. (He was part of a team that won a 2006 Pulitzer Prize for Hurricane Katrina coverage for the Times Picayune and went on to work for the NYT.)

But many links are since the verdict in her trial, and, of course, Zimmerman's trial is just starting.  And, if the NYT is the paper of record for this country, consider that there was a topic page here for Zimmerman and not a thing for Alexander.  And on NPR only one piece, and that because the AP ran a story that day.

I have an adopted  bi-racial cousin, who is the grandson of my mother's first cousin.  I hadn't thought about him when Trayvon Martin died, but his mother sure has been.  And it looks like racism cuts both ways against blacks.  Not only can you be shot with some impudence unless there's an unholy uproar, you're  not allowed to even brandish a firearm in your defense when you're abused. Did the prosecutors in FL--who have quite a bit of discretion in charging--really think Marissa Alexander was a danger to public safety?
Posted by Beth Wellington at 7:00 PM