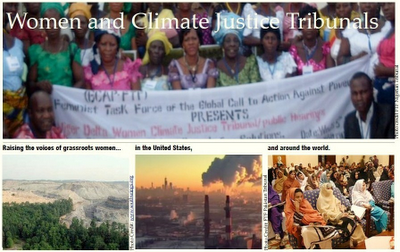 Women  throughout Central Appalachia — from southern West Virginia, eastern Kentucky, southwest Virginia and eastern Tennessee — impacted by mountaintop removal and other mining abuses will raise their voices, exposing the impacts of mountaintop removal on their lives, their families and their communities. I posted live from my twitter feed. If you weren't able to attend there is a recording of the tribunal online thanks to the Loretto Community.

The tribunal will present its findings at the Rio+20 at the United Nations Conference on Sustainable Development in Brazil this June. Similar tribunals have taken place around the world, spearheaded by the Feminist Task Force. These tribunals have been used to create a public space for women to draw attention to critical issues at local, national and global levels.