It saddens me that U.S. Senator Al Franken announced today that he will resign his Senate seat 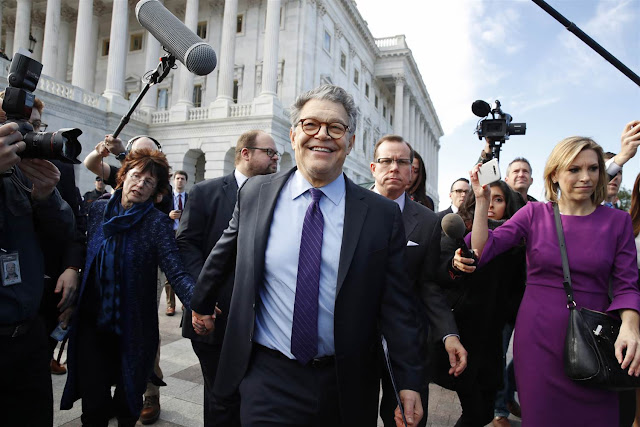 Photo by Jacquelyn Martin, AP accompanied an NBC story. Caption: "Sen. Al Franken holds hands with his wife, Franni Bryson, as he leaves the Capitol after announcing his resignation."
*

It's an odd photo.  Franken smiling as he leaves the Senate, Frannie looking like she's being tugged along.  And what's with the guy to the right of Franken staring intently at the camera.  His demeanor had been more serious during his statement announcing he will be resigning.  Listening to him in the Senate during this speech and those before it, or when he was questioning Trump's nominees for the cabinet, I always felt he was representing me, as well as the citizens of Minnesota--representing me better than my own Senators, although both are members of his party.

Politico had published a list of the extensive number of Democratic Senators who pressured Franken to resign.  As Dahlia Lithwick (JD, Stanford, 1996) wrote in Slate.com yesterday

By every metric I can think of, it’s correct. But it’s also wrong. It’s wrong because we no longer inhabit a closed ethical system, in which morality and norm preservation are their own rewards. We live in a broken and corroded system in which unilateral disarmament is going to destroy the very things we want to preserve.

Lithwick is dead right. There is no commonly accepted Moral High Ground left to occupy anymore, and to pretend one exists is to live in a masturbatory fantasyland. It’s like lining yourself up behind Miss Manners in a political debate against Machiavelli. Until the Democrats are willing to think asymmetrically about the very real political danger posed by the president* and his party, the danger will grow until it becomes uncontrollable, and that point is coming very soon, I fear. By the time the Democrats admit to themselves that their political opposition has moved so far beyond shame that it can’t even see Richard Nixon any more, the damage wrought to our political institutions may be beyond repair.

Oh, and just a reminder, out there touring a book right now are veteran conservative ratfckers Corey Lewandowski and David Bossie. Lewandowski grabbed a female reporter on the campaign trail and Bossie once invaded a hospital room and berated the mother of a young woman who’d committed suicide. You look across a political landscape like the one that the last few decades have created, and the Moral High Ground looks like the lichen-mottled ruins of a dead civilization.

The New Yorker's Masha Gessen, whose “The Future Is History: How Totalitarianism Reclaimed Russia,” won the National Book Award in 2017 opined,


the force that is ending his political career is greater than the truth, and this force operates on only roughly half of this country’s population—those who voted for Hillary Clinton and who consume what we still refer to as mainstream media....

Franken...didn’t take his apologies back now, but he made it plain that they had been issued in the hopes of facilitating a conversation and an investigation that would clear him. He had, it seems, been attempting to buy calm time to work while a Senate ethics committee looked into the accusations. But, by Thursday morning, thirty-two Democratic senators had called on Franken to resign. The force of the #MeToo moment leaves no room for due process, or, indeed, for Franken’s own constituents to consider their choice.

What's on my mind? I don't want to lose Senator Al Franken, don't want him to resign. He has been the one challenging the tRump appointments in committee, and "our Amy" has been mostly silent, voting against, but not on the front line in questioning their qualifications and lack thereof. He has stood up on health care, net neutrality, other issues, vocally and eloquently. Yes, I'm stating this publicly, on the record, this feminist #metoo attorney does not want Al Franken to resign.

In announcing his resignation, Franken said,

...this decision is not about me. It’s about the people of Minnesota. And it’s become clear that I can’t both pursue the Ethics Committee process and, at the same time, remain an effective Senator for them.

Let me be clear. I may be resigning my seat, but I am not giving up my voice. I will continue to stand up for the things I believe in as a citizen, and as an activist.

But Minnesotans deserve a Senator who can focus with all her energy on addressing the challenges they face every day.

There is a big part of me that will always regret having to walk away from this job with so much work left to be done. But I have faith that the work will continue, because I have faith in the people who have helped me do it.


I'm glad he will continue to speak.  I just hope folks will be listening.  The complete statement is eloquent. The video and transcript are here. I suggest you read it, rather than selected soundbites.  And while you're at it, you can listen to some of what we'll be missing. Here are just three:


Posted by Beth Wellington at 9:25 PM