Teri Blanton: "American people need to know that the EPA has cooked the books to justify its decision to repeal " 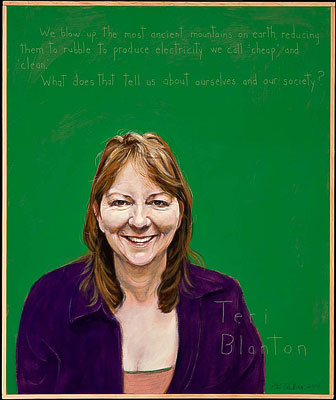 Portrait of Teri Blanton from Robert Shetterly's series, "Americans Who Tell The Truth."

Yesterday, while I was writing about retired miner Stanley Sturgill and his testimony against repeal of the Clean Power Plan, I looked at the list of the folks who had signed up to speak.  There, almost at the top of the list of speakers for 11/29 was my friend Teri Blanton, former chairperson of Kentuckians for The Commonwealth.  I wrote her last night and asked if she would share her comments here.


My name is Teri Blanton. I am a Kentuckian. I grew up in Harlan County, in the heart of our Appalachian mountains. My community today is a toxic mess, poisoned by acid mine drainage, coal slurry, and industrial waste. After more than a century of mining coal, we remain one of the poorest and least healthy counties in America. Harlan County has been losing coal jobs for decades. First the industry replaced miners with explosives. Lately mining jobs have fallen off a cliff due to competition from cheaper energy. Most of us understand those jobs are never coming back.

Despite this hard reality, good people are coming together in Harlan County and all across Central Appalachia to build a brighter future. Our people have been producing energy for this nation for over 100 years. We’re proud of our heritage. But there is no reason we should stay stuck in time as the world changes. Why shouldn’t eastern Kentucky be in the forefront of a clean energy revolution? Why shouldn’t we seize this moment to create jobs in wind, solar and hydropower? Appalachian people are resourceful, skilled, and hardworking. We can put our communities back to work – today – by making our homes energy efficient and installing small-scale renewable energy systems. That’s true energy independence. This EPA climate plan can and should do much more to help us make this transition to a clean energy economy.

I’m also a grandmother to three wonderful grandchildren. My family lives within 40 miles of 3 coal burning power plants in Kentucky. All 3 of my grandchildren suffer from asthma or other COPD related illness. For us this debate is not just about reducing the threat of climate change. It is also about reducing exposure to toxic pollution from burning coal that contributes to high rates of asthma, premature death, and chronic heart and lung diseases all across KY. This EPA Clean Power Plan can and should do much more to protect our health and the health of all people living in frontline communities where dirty energy is extracted and burned.

I am sickened by the shameful, harmful, and corrupt actions of the EPA under President Trump and EPA Administrator Scott Pruitt. Your decisions to pull out of the Paris Climate Accord and repeal the Clean Power Plan are indefensible. Undoing the Clean Power Plan threatens the health and safety of our communities, families, and economy. It flies in the face of science and common sense.

The American people need to know that the EPA has cooked the books to justify its decision to repeal the Clean Power Plan. For example, the EPA under President Trump and Scott Pruitt refuse to accept overwhelming health data that reducing soot and smog from coal burning power plants will prevent thousands of premature deaths and asthma attacks. Instead, the agency has embraced a false theory that there are threshold levels of air pollution below which it is “safe” for us to breathe. With this wave of a magic wand, the agency claims that the Clean Power Plan would produce no health benefits. But we know the opposite is true. The costs of complying with the Clean Power Plan are far outweighed by the benefits in terms of lives saved and sick days and hospitalizations avoided.

We should be talking about ways to strengthen the Clean Power Plan, not scrap it. This rule is the very least that this country should do to protect the health of people living in frontline communities and reduce the risks of global climate disruption. The fact is, the Clean Power Plan was never strong enough. But it was a start. It was designed to encourage states and utilities to plan for and begin a gradual transition to low-carbon energy systems. It gave states flexibility and time to find their best path forward.

When Scott Pruitt announced his decision to seek the repeal of the Clean Power Plan, he came to Hazard, Kentucky and promised that this action was going to bring back coal jobs. What a pathetic lie. The Clean Power Plan has never been implemented due to legal challenges. It is responsible for exactly zero lost coal jobs in Central Appalachia, and its repeal will do nothing to bring new investment or jobs to our region.

My friends, family, and neighbors know that coal is not coming back. And we’re so damn tired of politicians who endlessly fight a fictional war-on-coal but refuse to support or invest in actual solutions that could help our people.

So in 2015, a grassroots organization called Kentuckians For The Commonwealth decided that if our politicians wouldn’t lift a finger to begin planning for how to comply with the Clean Power Plan, we’d do it ourselves. We led an 18-month public planning process. More than 1,200 Kentuckians participated from Pikeville to Paducah. We asked everyone to share their vision for Kentucky’s energy future, and their best ideas for moving in that direction without leaving people or workers behind. We did an environmental justice analysis of our state to learn which communities are most affected by cumulative pollution and poor health outcomes, and to better understand the relationships between poverty, race, and exposure to pollution in our state.

Then with all of that input we designed a plan we call the Empower Kentucky Plan. You can view all of the recommendations and a description of our process at www.empowerkentucky.org. It is loaded with homegrown solutions to protect health, create jobs, lower people’s energy bills and shape a just transition to a cleaner energy system in Kentucky.

Here’s what you need to know about the Empower Kentucky Plan: Our plan produces better results for Kentuckians in terms of jobs, health, and lower average bills than the business-as-usual scenario. Specifically, our plan would create 46,300 more net jobs over 15 years and lower average home energy bills by 10%, compared to business-as-usual. And it would slash CO2 pollution from Kentucky’s power sector by 40% over 15-years, far exceeding the requirements of the Clean Power Plan.

In other words, our People’s Energy Plan for Kentucky exposes Scott Pruitt’s Big Lie. The Empower Kentucky Plan shows that the steps needed to address climate change are actually better for jobs and ratepayers – and much better for health – than sticking our heads in the sand and doing nothing. And if we can do that in Kentucky, we can do it everywhere.

I therefore urge the EPA to follow the science and reject the corrupting influence of the fossil fuel industry. Drop this awful proposal. Defend and implement the Clean Power Plan. Return to the Paris Accord. Do your job.

Flaccavento has announced his bid for the Democratic Party nomination for the 9th U.S. Congressional District in 2018, the seat currently held by Morgan Griffith. (website)

Posted by Beth Wellington at 9:28 AM