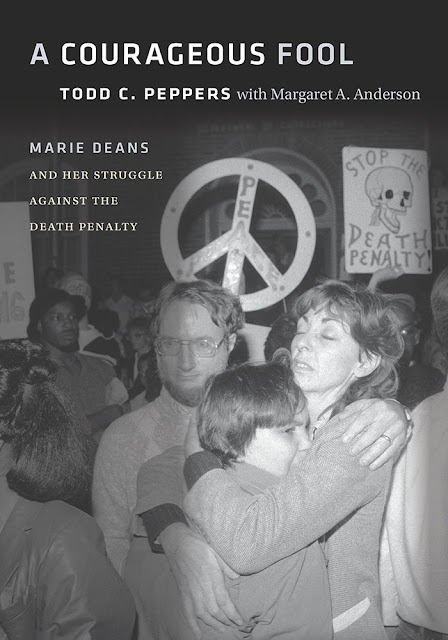 Yesterday, I when I got home I found a review copy of Peppers' A Courageous Fool: Marie Deans and Her Struggle against the Death Penalty (Vanderbilt, 2017), ISBN 9780826521613.  When I opened it this morning,  I saw that Joe Giarratano had written the eloquent introduction.

On December 11, I had gotten a facebook message from poet and young adult novel author Mary Crockett Hill suggesting I might want to review this book written by Todd Peppers, a professor she knows from Roanoke College for the Roanoke Times.  I wrote her back, telling her that I remembered Marie Deans. who died in 2011, from when I wrote about Joe Giarratano for the New River Free Press, both when Wilder pardoned him in 1991 and when I visited him with my friend Ruth, after he started teaching Peace Studies at Augusta in 1992 with the help of journalist and peace studies teacher Colman McCarthy.   In looking up how to spell Joe's name, I was glad to read that he had been granted parole from Deerfield in November 2017 and that he's expecting to be released this month.

According to his attorney, Stephen A. Northup, Giarratano plans to move to Charlottesville and work as a paralegal with lawyer Steven D. Rosenfield. He also hopes to work with the University of Virginia Law School’s Innocence Project. Here's Joe's blogpost on his parole.

In 2009, many folks including McCarthy asked then Governor Tim Kaine to release Joe.  Kaine refused to do so.  This release is too long in coming.  The last time I wrote about Joe, it was in May 2012 about his description of the effects of solitary confinement while serving at Red Onion.

After several dead ends, this afternoon, a Roanoke Times features writer Mike Allen suggested if I want to review the book, I should contact his editor.  I've written reviews for the paper before, as well as The Journal of Appalachian Studies, LLRX, The New River Free Press and have interviewed authors about their books for The Guardian.  We'll see if she'll assign a review.  If so, I'll post a copy and a link, here, at The Writing Corner.  If not, I'll write the review here.

Posted by Beth Wellington at 10:01 PM