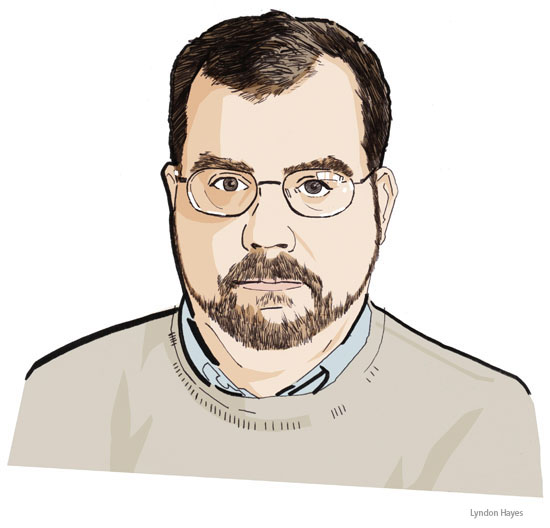 Illustration is by Lyndon Hayes and used with permission.  It accompanied "Sustained Outrage: Ken Ward Jr. stayed home to make a difference," Brent Cunningham's 11/28/2011 interview with the Charleston Gazette-Mail (WV)'s Ken Ward, Jr. in the Columbia Journalism Review.  At the time Cunningham was managing editor of CJR and went on to become deputy editor.  Since January 2015, he has served as managing editor of the Food & Environment Reporting Network (FERN),  a non-profit news organization which produces in-depth and investigative journalism on food, agriculture, and environmental health.  Cunningham served as the statehouse correspondent for the Charleston Daily Mail (which merged with the Charleston Gazette) from 1990-4.


After ProPublica announced October 5 its project to pay for a local reporter to do investigative journalism across the country, they thought they'd get 75 applicants. Instead there were 239 applicants from 45 states and one of the seven selected is the Charleston Gazette-Mail of WV's Ken Ward Jr.

Ken Ward Jr., a reporter at the Charleston Gazette-Mail since 1991 who covers the environment with a focus on coal mining, mine safety, the chemical industry and workplace safety. In 2014, when a chemical leak contaminated the drinking water of hundreds of thousands of people, Ward exposed significant flaws in federal safety guidelines for the chemicals and in the state’s water sampling program. His disclosures led to the appointment of an independent scientific team to examine the spill’s impacts. 'I can’t think of many places that are in need of good journalism more than West Virginia is, or what higher calling journalists have than to try to write stories that make their home a better place,' Ward said in an interview with the Columbia Journalism Review a few years back.


Charles Ornstein, a senior reporter at ProPublica, covering health care and the pharmaceutical industry, has been selected to be the senior editor of the local reporting network.
I couldn't be happier with this project.  I love that that ProPublica is partnering with local reporters rather than parachuting in to report on national issues. The New Yorker, The New York Times, Washington Post and others could (should) do the same.

I couldn't be happier than with the selection of Ward.  He's a great partner and reimbursing his salary will help out the Gazette-Mail.  I've admired Charleston Gazette for years, which merged with the Daily Mail.  Would love for them to use the money to add Paul Nyden back into the mix, since they retired him at the time of the merger.  The link is Ward's overview of Nyden's career, in which he writes,


So much of what I know about the coal industry, organized labor, and journalism I learned from him. Every time I write a story about coal, I’m standing on his shoulders. Lately, I’ve been trying in the paper and on this blog to write about what comes next for the coalfields. But it turns out, if you go back and read Paul’s dissertation, Miners for Democracy: Struggle in the Coalfields, Paul in his own way framed far better than I ever could the heart of the challenges the people of our region faced 40 years ago and are still struggling with today:
Today, thousands of railroad cars leave the mountains every day, overflowing with coal. When they return, they are empty. The people of Appalachia have nothing to say about how that coal is used nor about who reaps the harvest of riches from their mines. Someday, the vast riches of Appalachia will no longer flow into the hands of a few powerful individuals, but into the hands of the whole Appalachian and American peoples.


In addition to monetary support, Propublica promises to offer editorial guidance.  That guidance could (should) go both ways, in the case of Ward.  The other newsrooms and reporters selected by ProPublica are:

The masthead below, is from Ward's blog, The Coal Tattoo, which he maintains for the Gazette-Mail, in addition to reporting for the paper.  The paper's Brenda Pinnell designed it using (with permission) a photo of the mountaintop removal site near Kayford, WV by from the National Geographic's Dennis Dimick's and a family photo of Bud Morris from his widow Stella Morris. His death in December 2005 was part of a Gazette series on coal-mine safety published after the Sago Mine disaster in 2006.

Posted by Beth Wellington at 11:04 AM