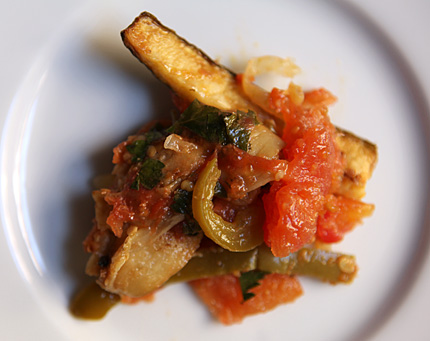 This photo accompanied Epicurious Editor Sara Bonisteel's 07/18/12 post "Julia Child's Ratatouille."  I first posted this on 8/5/13  at 9:47 pm  and last updated it on 9/1/14 at 8:20 pm to include instructions for roasting the veggies, rather than sauteing them.

The August 6 farm share for Glade Road Growing should include tomatoes, basil, buttercrisp head lettuce, Rosa de Tropea onions, green peppers and a jalapeño, and summer squash. Leave out the jalapeño and lettuce (you may want to make tacos) add an eggplant and garlic (which should be available at the farmer's market) and you're good to go for Beth's Sort-of Julia Child's Ratatouille.

My version is simplified from Child's recipe.  I first made hers, as written, in Paris after shopping at a market with my mother's childhood friend Vivi. (We were starving by the time we ate, and Bonisteel writes it took her four hours to make Julia's version in 2012.)

If I don't have time to make this all at once, sometimes I will fry up the the eggplant one evening and refrigerate and the zucchini the next. An alternative way to save time is to halve and roast the eggplant in my convection oven then peel and slice to save time.  I even halve and roast the the zucchini at the same time and then slice it (no need to peel.)  If you had a conventional oven on, to say bake cornbread (something I rarely do in the summer) you could roast all the veggies at the same time.

Scrub 1 pound of zucchini, slice off the two ends and cut into slices about the same size as the eggplant. Place the vegetables in a bowl and toss with 1 tsp. salt. Let stand for 30 minutes. (This removes the bitterness.

Thinly slice 1/2 pound onions (about 1 1/2 cups)
Slice 2 sliced green peppers (about 1 cup)
Mash 2 cloves mashed garlic
Chop 1 pound firm, ripe, red tomatoes (Julia would peal, seed and juice them and slice them into 3/8" inch strips, but I don't and when home or farm grown tomatoes aren't in season, I used diced canned as a substitute)
Mince 3 Tablespoons fresh parsley (her choice) or basil (mine)

Drain and pat dry eggplant and zucchini and saute in hot extra virgin olive oil in a cast iron skillet one layer at a time for about a minute on each side to brown very lightly. Remove to a platter.

In the same skillet, cook the onions and peppers (add additional olive oil if needed) for about 10 minutes, until tender but not browned. Stir in the garlic and season with salt and pepper to taste. Lay tomatoes over the onions and peppers. Season with salt and pepper. Cover the skillet and cook over low heat for 5 minutes or until tomatoes have begun to render their juice. Uncover, raise heat and boil for several minutes until juice has almost entirely evaporated. Transfer all the veggies to a stainless steel pot cover and simmer over low heat for 10 minutes. Correct seasoning if needed and cook uncovered for about 15 minutes more, stirring several times with a wooden spoon until the juice has evaporated. (Julia would place a third of the tomato mixture in the bottom of a 2 1/2 quart casserole (about 2 1/2" deep) and sprinkle with 1 Tbsp. fresh, minced parsley over tomatoes, then arrange half of the eggplant and zucchini on top, then half the remaining tomatoes and parsley, finishing off with the remaining eggplant and zucchini, then tomatoes and parsley. She didn't stir, but basted and worried about scorching the veggies if the temperature was too high.)

You can serve this warm or chill it. I like to add 3 cups of cooked garbanzo beans to make it a main dish.

BTW, This beautiful 2007 photo is from NYC food blogger Deb Perelman (email) of The Smitten Kitchen, who developed "Ratatouille’s ratatouille" after seeing the film. 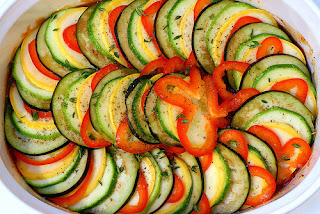 Posted by Beth Wellington at 9:47 PM