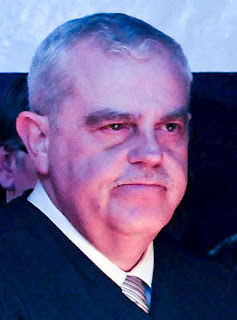 Photo by Chris Dorst for the Charleston Gazette.

It turns out that in my post of three months ago (an eon in news terms), television news reporter Kallie Cart was onto something when she reported sources indicated that Thorbury and Baisden were under federal investigation.  I wonder if she'll get any acknowledgment from those at the Williamson Daily News and elsewhere who criticized  her for rumor mongering.

August 14 indictment for WV Case 2:13-cr-00208 reads like an television or movie script outline.
This Wednesday, August 21,  Judge Michael Thornsbury is due in Federal Court in Charleston for allegedly conscripting various players in the legal system to frame Robert Woodruff the husband of Thronsbury's secretary Kim on drug and assault charges after she ended her affair with the judge in 2008.  The West Virginia Supreme Court has taken action to investigate and to replace him until the matter is settled.

Meanwhile, Baisden was indicted for allegedly trying to buy tires for his personal vehicle at a government discount, then terminating the county’s contract with Appalachian Tire when it refused to cooperate.

No news of any election law violations as Cart originally reported, but the investigation is ongoing according to U.S. attorney.  For more, read the accounts by Associated Press, the Charleston Gazette and the Charleston Daily Mail.
Posted by Beth Wellington at 6:00 PM