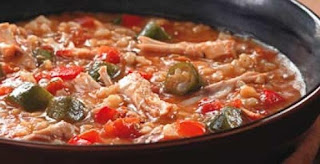 Here's one of the promised recipes for how to use leftover chicken when you roast, bake or stew a Freedom Ranger chicken (The recipe works with grocery store chicken, of course, but won't be nearly as delicious.)  You can also joint the raw chicken and use the dark meat by baking it in a pyrex covered casserole in the oven. gumbo is based on the "Holy Trinity" of Creole  cooking:  bell peppers, onions and celery and thickened with a roux.  Traditionally served over cooked rice, you can also add the rice to the stew.

I've adapted this recipe from Tony Chachere (1905-1995) known in Arcadiana as the "Ole Master" of fine Cajun cuisine, who after selling insurance and other pursuits founded his eponymous food company following upon the success of his 1972 Cajun Country Cookbook.  Chachere was the first inductee into the Louisiana Chefs Hall of Fame, just one week before his death.

Easy Creole Chicken Gumbo
Serves 5 as main dish or 10 as soup before the meal.


Dice 1 medium red or green bell pepper
Dice 2 small onions
Dice 3 stalks celery
Peel and smash 4 cloves fresh garlic
Cut into eighths w large vine-ripened tomatoes (in winter, you can substitute canned whole tomatoes)
Slice 1 # fresh okra in half or third depending on size of pod (if not available, you can subsitute frozen okra)
Coat a cast iron skillet with extra virgin olive oil and over medium heat saute peppers, onions, celery and garlic until translucent. Add a TB of extra virgin olive oil and 2 TB whole wheat flour and cook until flour is browned to make the roux.

Fold in sauteed veggies/roux, okra and tomatoes and simmer, stirring occasionally until okra is cooked.  Add 2 1/2 cups of cooked rice and 2 1/2 cups of diced dark meat chicken and heat through.
Add salt and black pepper to taste.

Although chicken gumbo traditionally contains sausage (about half and half of Smoke Sausage
and Andouille in amounts equal to 4/5 of the chicken in Chachere's version) I don't eat pork.  Feel free to add it, if you desire.

BTW, Chachere's company webpage explains the origins of the traditional Creole gumbo to the French in New Orleans attempting to make bouillabaisse in the New World and explains the other cultural influences:


The Spanish contributed onions, peppers, and tomatoes; the Indians contributed filé, or ground sassafras leaves; the French gave the roux to the stew and spices from the Caribbean. Over time it became less of a bouillabaisse and more of what is called gumbo. Later the Italians blasted it with garlic. The Germans contributed potato salad as a side and even started the practice of eating gumbo with a scoop of potato salad in it; they also introduced the practice of eating gumbo with buttered french bread.