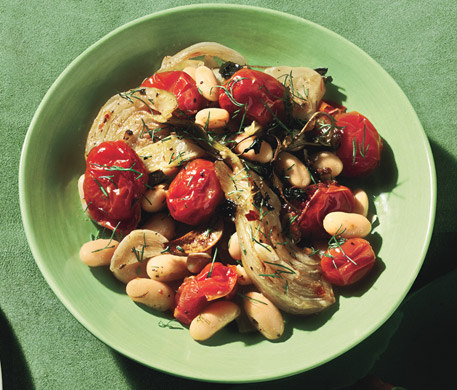 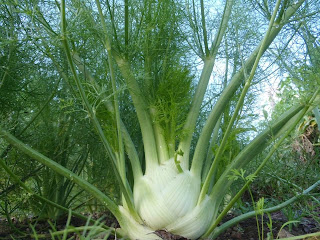 A fennel bulb should be in the Glade Road Growing farmshare August 20, along with tomatoes, iceberg  lettuce, sweet onions and winterbor (curly) kale.  The above photo is from the farm's facebook page and here's a recipe for you to try...

Trim fennel bulb and cut in half vertically. Cut into 1/2-inch-wide wedges, leaving some core attached to each wedge. Chop enough fennel fronds to measure 1/2 cup.

Dice two cups of vine-ripened tomatoes.  If not in season, you can used diced canned tomatoes.

Bake until fennel is soft, stirring occasionally, about 20 minutes. Garnish with raw fennel fronds and serve warm or room temperature.  This is also delicious over whole wheat pasta and topped with grated Asiago cheese.

About Ian Knauer and Nigel Cox

I had already made this recipe when I looked for a photograph of something similar, I found the one at the top of the page at Epicurious, one of my favorite food sites on the internet.  If you want to drool, check out Nigel Cox's other food photos at his website.

Ian Knauer (website , twitter) wrote for the estimable Gourmet for ten years until Condé Nast announced in October 2009 that the November issue would be it's last, after a run that started in 1941.

Since then Knauer has been writing for Bon Appétit  and other publications and "re-discovering and revitalizing" his "family’s local food traditions by way of our Pennsylvania farm."  His cookbook The Farm: Rustic Recipes for a Year of Incredible Food came out in 2012 and he tells me his PBS series of the same name is slated for 2014.   Until then, here's a video of Knauer making asparagus slaw from this spring.

Here are other some favorites, in addition to Epicurious.com:

*Mollie Katzen, one of the originators of the Moosewood Collective has recipes on her site.  The restaurant which continues to be inspired by her cooking, also has recipes its site.
*Ina Garten, AKA the Barefoot Contessa posts her recipes at her site here (and if you search on her name, there are other collections of her recipes at places such as The Food Network, Oprah and House Beautiful
*Martha Stewart, who now has a site in beta for recipes
*PBS has gathered up many of Julia Child's recipes.  You also search under her name to find many others.
*My favorite Iron Chef back when I was watching it on TV was always Cat Cora
*She's less famous (infamous) than Paula Dean, when it comes to Southern cooking I prefer  Betty Morgan of Chez Bettay


Posted by Beth Wellington at 7:21 PM