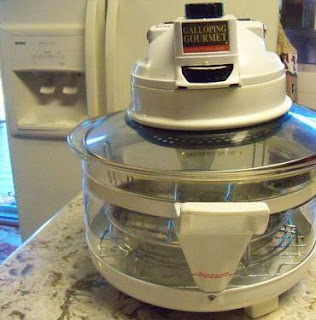 Remember the Galloping Gourmet? I'm the new owner of one of his Perfection-Aire Ovens c 1991 according to the cookbook and instruction manual. Thanks to whoever left it off at the YMCA! I snatched it up yesterday and roasted one of Glade Road Growing's fresh chickens in it tonight before heading into town...MUCH better than a crock pot, which stews chickens, despite promising to roast them.

Sally Walker of Glade Road Growing had asked me back on July 20 if I could develop some recipes that use her whole chickens (which weigh about 4-5 pounds) because "it seems like lots of people don’t know what to do with a whole chicken." She even offered to give me a couple of chickens so I could "try some things with them and then maybe get more ideas."

Usually, I cook very little meat, maybe one chicken a year in honor of my heritage (what Jewish girl doesn't know how to make chicken soup or bake a chicken for Shabbat?)  I had already cooked this year's chicken (in fact, some was still in the freezer), but didn't want to turn down Sally and JP's pastured broilers which are raised on non-GMO feed from chicks from the  Freedom Ranger Hatchery in Reinholds, in Pennsylvania Dutch Country.  The Hatchery imports its  breeding stock from Burgundy and Brittany in France and its chicks are derived from a heritage breed of chicken developed in the early 1960’s to meet the  standards of the French Label Rouge Free Range program.

The first chicken, which I picked up from her at the Blacksburg Farmers' Market on July 17 was frozen and I defrosted it in the fridge over several days. That was the one that fell victim to the crock pot, and while delicious, was not exactly what I wanted.

The second chicken, which I picked up at the farm the evening of July 25 was freshly slaughtered that day and Sally suggested that I wait at least  12 to 36 hours to cook it as it would be more tender.  I waited a bit longer because I was resisting heating up the kitchen.  And then yesterday, voilà!  Recipes to come...


Posted by Beth Wellington at 9:55 PM