How to Cook a Whole Freedom Ranger Chicken 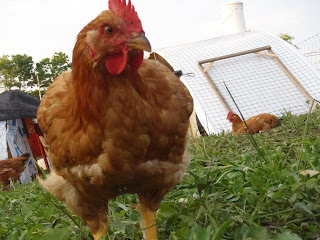 When Sally Walker of Glade Road Growing asked if I knew how to cook chicken I thought, what nice Jewish girl DOESN'T?


The easiest ways to cook a whole chicken are stewing, baking and roasting.  If you are feeding friends or a family, you may be able to eat the whole chicken...a 4.5 pound bird of this breed yields about 2 cups of white meet and two cups of dark meat (and about 1 cup of schmaltz, i.e. rendered chicken fat--the high fat content of this breed keeps the chicken from drying out while roasting.)

Otherwise, you can pick the meat off the carcass and refrigerate what you plan to eat in 3 or 4 days and freeze the rest  for later. In subsequent entries, you will find more recipes for the left-over chicken (which can alternately be made from raw chicken if you joint the whole chicken with a sharp knife or poultry shears.)  They are:
Easy Creole Chicken Gumbo
Spicy Chinese Eggplant and Chicken
Spicy Chinese Chicken and String Beans
Tatsoi and Chicken (substituted for  Tempeh)

As I wrote earlier, I went ahead and stewed the first chicken in a crock pot, since it had been frozen.  I will never use a crock pot again.  Instead I'd suggest you stew in  in the oven in a covered casserole or if you don't want to heat up the oven, even stewing in a pot on the stovetop would have been a better choice.   If you have large enough cookware you can stew it whole; if not, joint it as shown at the above link.

I roasted the fresh chicken un-stuffed for about 40 minutes in a convection oven (which in addition to being faster, takes less  electricity and doesn't heat up the house so much as a conventional oven.) But since I suspect most of you only have a conventional oven, here's a recipe adapted from another nice Jewish girl, aka, the Barefoot Contessa, Ina Garten, who uses bigger birds.

A 4½ - 5 lb  bird from Glade Road Growing will take about an hour and 15 minutes at 425 degrees F.  (Some folks prefer to roast at 375 degrees F for 1½ to 2 hours.  A 4 pound bird about fifteen minutes less.  Add another 20 minutes to the cooking time for a stuffed bird.  All these times are approximate.  What you want to do is roast it until the juices run clear when you cut between a leg and thigh, which is the part that takes the longest to cook. 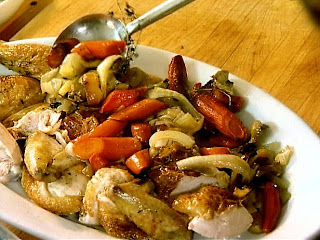 Thickly slice one large onion
Cut 4 carrots into 2-inch chunks
Cut 4 stalk of celery into 2-inch chunks
Half  one pound of baby red or Yukon gold potatoes (or  cut larger potatoes to appropriate size)
(Garten uses a bulb of fennel cut into wedges instead of the potatoes and celery)
Peel and smash 5 large cloves of garlic.

Preheat the oven to 425 degrees F.


Rinse a 4- 5 pound Glade Road Growing Freedom Ranger chicken (which comes without giblets) inside and out.  Use poultry shears or a sharp knife to remove excess fat, skin, wing tips and neck and set aside in the refrigerator for when you make a stock of the roasted chicken's bones. Pat the outside dry and liberally salt and pepper the inside of the chicken.  Place  the garlic in the cavity.  Brush the outside of the chicken with extra virgin olive oil and salt and pepper. (Garten uses butter, but my mother was raised Orthodox, so I can't make myself do it...)

In a roasting pan, place veggies and toss with salt, pepper and more olive oil.  Spread over the bottom of the pan and place the chicken on top.  Roast until the juices run clear when you cut between a leg and thigh.  Remove the chicken and vegetables to a platter and cover with aluminum foil for about 20 minutes. Slice the chicken onto a platter and serve it with the vegetables.
Posted by Beth Wellington at 9:57 PM