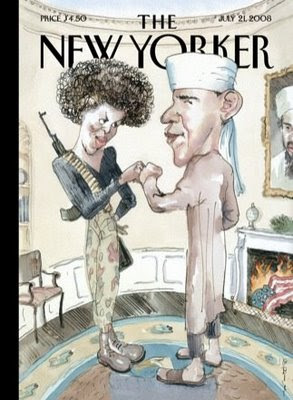 Barry Blitt's cover art posted today for the July 21 New Yorker. His other covers are here.

The New Yorker and its cover, pictured above, has become the Talk of the Town and beyond, as Jonah Goldberg of The National Review, notes,

What I find interesting about the New Yorker cover is that it's almost exactly the sort of cover you could expect to find on the front of National Review. Roman Genn could do wonders with that concept. Of course, if we ran the exact same art, the consensus from the liberal establishment could be summarized in words like "Swiftboating!" and, duh, "racist." It's a trite point, but nonetheless true that who says something often matters more than what is said — and, obviously, that satire is in the eye of the beholder.

HuffPo asks just why the mag would chose an illustration "that could have run, irony-free" on the NR in an interview with editor David Remmick by Eat The Press editor Rachel Sklar. While Remmick said it was meant to satire the smears, cartoonist Daryl Cagle weighs in on why he found it failed as a political cartoon.

There is no frame of reference in The New Yorker's cover to put the scene into perspective. Following the rules of political cartoons, I could fix it. I would have Obama think in a thought balloon, "I must be in the nightmare of some conservative." With that, the scene is shown to be in the mind of someone the cartoonist disagrees with and we have defined the target of the cartoon as crazy conservatives with their crazy dreams.

Not everyone agrees. One of Cagle's commenters, "Zammer" wrote,

...A frame of reference is usually a substitute for thought and/or unimaginative cartooning.... I'd be greatly surprised if there are many subscibers scratching their heads and saying, "What does it MEAN?"

Seems to me the title is the frame of reference. So, how do you weigh in?

Cagle has a series of riffs on the Blitt's New Yorker cover at his site. To my lights, TAB's is the most original, and follows Cagle's rule that it reflects (I'd guess) the cartoonists point of view. 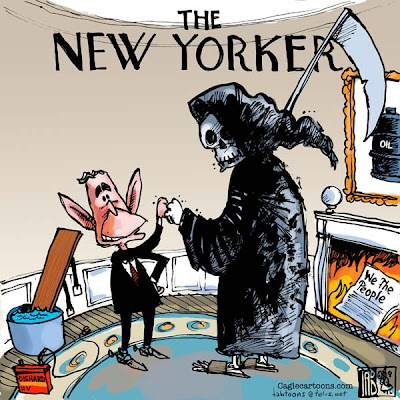