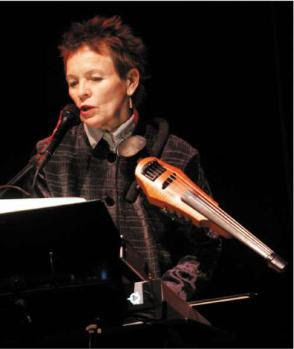 Reuters photograph with photographer uncredited, as it appeared with the The Independent's art and media correspondent Ciar Byrne's "Laurie Anderson's anti-American attitude sparks walkouttour" on May 3, 2008.


Oddly, the art correspondent for The Independent concentrated on the walkout and some gossip about Anderson, covering the show as it closed.

It may be three decades since Laurie Anderson reached No. 2 in the UK singles chart with her eight-minute experimental epic "O, Superman"– which was a haunting indictment of Cold War American foreign policy – but the New Yorker reminded British audiences this week that she has lost none of her radical fire.

A performance of her latest show, Homeland, at the Barbican in London on Thursday prompted a walkout by some audience members who were enraged at her criticism of her fellow Americans and over her condemnation of the US invasion of Iraq.

I say oddly because Joy Godwin at the conservative New York Sun (a paper which called Iraq protesters treasonous) concentrated on the show and wrote a rave 7/24.

Laurie Anderson calls it a "concert poem." Depending on your point of view, you might categorize it as an art-rock song cycle or a spoken-word performance set to music.

But whatever you term it, Ms. Anderson's "Homeland," which opened on Tuesday in its Lincoln Center Festival incarnation, is the work of a consummate artist at the highest level of her craft.

This is one of those times when I wished I lived in NYC for the show, which continues through July 26. Youu casn read a transcript of a 7/23 interview with Anderson at Democracy Now.

By the way, Anderson awarded the lifetime achievement Webby to David Byrne. His five word speech:

Mr. DJ, can you play another song?

The Telluride Film Festival has selected Anderson to design its poster this year, shown below. 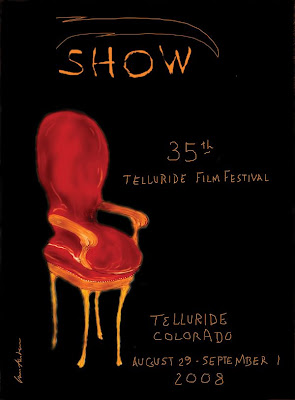 Posted by Beth Wellington at 7:03 PM