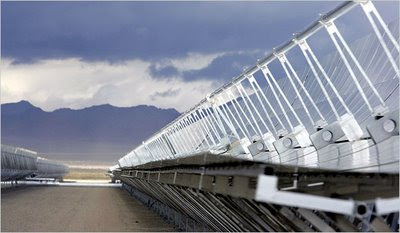 Photo by Steve Marcus of the Las Vegas Sun shows Acciona's Nevada Solar One plant in Boulder City which uses mirrors to channel sunlight into an oil-filled tube to power a steam turbine which produces enough electricity to power about 14,000 homes, according to the New York Times.

Amid the rising cost of oil and complaints about the carbon foot print of coal plants, solar companies have filed more than 130 proposals with the Bureau of Land Management since 2005 to construct utility scaled solar plants, especially in the deserts of
of Arizona, California, Colorado, Nevada, New Mexico and Utah. In May, however, according to a June 27 New York Times report, the Bureau f has placed a moratorium on new solar projects on public land, saying it needs an environmental study to determine the effects of large solar plants.

Those in the industry fear the moratorium will stunt their growth.
Posted by Beth Wellington at 11:32 PM