Obama's speech at the Victory Column in Berlin 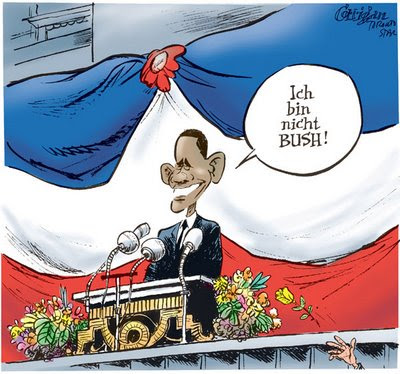 Cartoon 7/24/08 by the Toronto Star's Patrick Corrigan (email, website, bio) of Obama's Thursday speech (transcript, video and what others are saying about it, via Memeorandum.

Oddly, some Germans seem to be more sure of the outcome of the election than even U.S. Democrats. Gerhard Spörl, chief editor of Der Spiegel's foreign desk, enthuses in "No. 44 Has Spoken."

Europe is witnessing the 44th president of the United States during this trip.

I'm not sure his opinion will serve to win Obama favor in the U.S.

Spörl assessment interests me, given arguments that Obama's naivety in foreign policy bodes poorly for international respect (a Clinton meme since adopted by McCain and others such as Townhall's Dennis Prager):

hard-nosed Europeans will hope and pray that the future President Obama isn’t really all that serious about the saving the world of tomorrow, the polar caps, Darfur and the poppy harvest over in Afghanistan....we will have to quickly get used to Barack Obama, the new leader of a lofty democracy that loves those big nice words -- words that warm our hearts and alarm our minds.

Posted by Beth Wellington at 6:10 PM