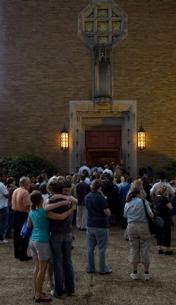 Photo from the News-Sentinel shows folks before the start of a candle light service at the outside Second Presbyterian Church Monday in response to the previous day's shooting at the Unitarian Church next door.

The congregation of the Tennessee Valley Unitarian Universalist Church was enjoying a children's musical Sunday, when Jim David Adkisson allegedly attacked, murdering two and wounding six others. According to court records, he wanted to kill liberals "who are ruining the country."

If Mememorandum is accurate, I have where's the coverage of this hate crime in the right wing media? There seems to be only Michele Malkin (quoting Confederate Yankee, who emphasized it was an attack on churchgoers, not liberals) and one oddball, I'll not link to, who opined at Calvinists 4 Conservatism,

If he really hated liberals and gays, he would have gone to either a college campus or an Abercrombie & Fitch store, respectfully. However, he went to a church. This leads me to believe that the note about hating liberals and gays was forged, perhaps by some Marxist wanting attention.

Posted by Beth Wellington at 6:03 PM