Sweeney Todd's at the Lyric 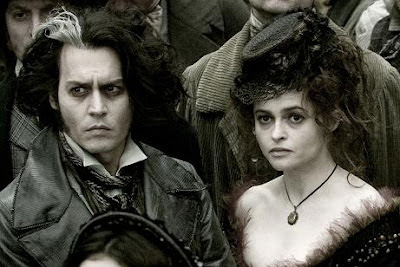 ... There's a hole in the world like a great black pit
and the vermin of the world inhabit it
and its morals aren't worth what a pig could spit
and it goes by the name of London.
At the top of the hole sit the privileged few
Making mock of the vermin in the lonely zoo
turning beauty to filth and greed...
I too have sailed the world and seen its wonders,
for the cruelty of men is as wonderous as Peru
but there's no place like London!


lyrics to "No Place Like London," thanks to the site AllMusicals.com

So opens Sweeney Todd, which started a week's run at Blacksburg's Lyric Theatre tonight and was much more a filmed musical (or opera, one could argue) than I expected, having abstained from reading the reviews, and gorier, but in a characteristically Tim Burton computer-generated imagery kind of way--sort, of a Sweeney and the Meat Pie Factory.

In fact, there was one moment in the film, where Depp's Sweeney looks upon Bonham Carter's Mrs. Lovette with the same queasiness at human contact we saw in his embodiment of Roald Dahl's Willie Wonka, in another Burton film, Charlie and The Chocolate Factory.

I found the acting of everyone involved excellent and the singing by the two leads affecting, an extension of their portrayals, rather than a mere breaking into song. Other reviewers either liked he film more--or less--than I did. Roger Ebert of the Chicago Sun-Times, Peter French of the Guardian/Observer, Rolling Stone's Peter Travers, and A.O Scott in the New York Times raved. Salon.com's Stephanie Zacharek panned the effort.

So, while I'm a fan of the two protagonists, of the filmmaker and of Sondheim, and while, I'd recommend you see the flick, I still came away a bit disappointed, as I found myself interested, but not transported.
Posted by Beth Wellington at 7:44 PM