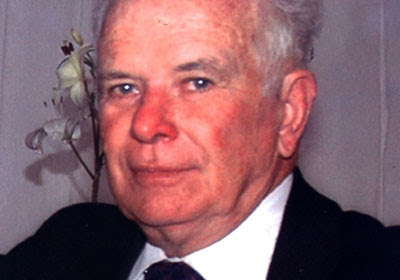 Photo of Jorge Julio López from the 2006 missing person's report from the the Government of Buenos Aires. "The amnesia of the gunmen" is a translation of a line in the poem "Reconciliaciones" (reconciliations) by Uruguayan journalist, playwright and poet Mario Benedetti.

So says the report. López had been abducted the first time on October 21, 1976 and held for nearly three years in three of the 21 clandestine detention centers operated by Osvaldo Miguel Etchecolatz, then director of investigations for for the Buenos Aires police and right hand man of Ramón Camps.

Unlike others in the centers, López survived to tell the tale. By this time 77 and a bricklayer, he had been about to offer additional testimony about his experiences at Etchecolatz's trial. Human rights workers suspected an attempt at intimidating other witnesses. Never heard of him? I'm not surprised.

Here is what his family wrote in an open letter to the Argentines:

Our anguish grows day by day, night by night, in this nightmare with no end. Type his name in the search box of the Washington Post or the New York Times and you get nothing, although his disappearance was covered by Reuters and Amnesty International, among others. As far as I know, he's still missing. If you'd like to read about the case, I recommend Jeff Barry's blog or if you can read Spanish or abide a bad translation by Google, try the human rights blog at Villa Crespo, mi barrio.

Posted by Beth Wellington at 8:12 PM