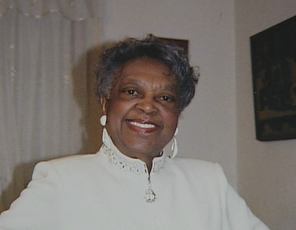 Photo is from a screenshot of  WCHS television's video.

Thomas Carlyle is reputed to have written, "Histories are a kind of distilled newspapers."

As a lover of your newspaper, that's why I was disappointed today when I checked your archives and couldn't read more about Mary C. Snow, an educator in Kanawha County, West Virginia Schools for more than fifty years and the first African-American principal in the area. By contrast, WCHS television still has a January  video online. Perhaps that's because Wes Armstead, now Managing Editor at the station remembers Snow as one of his teachers.

Mary Snow passed away in January at the age of 97.  Now, as you report, many in the community have asked that West Side Elementary School be renamed in her honor as a remembrance of her dedication to the community's children. And yet, reading the virulent comments on the articles, I'm wondering how many folks know in any depth about the accomplishments of Ms. Snow and her importance in the history of Charleston and of West Virginia.

As the December 19 editorial in The Daily Mail noted of the School Board's 3-2 not to rename the school,


It's a crying shame, and a missed opportunity to teach history.

Snow, who died in January at age 97, was a shining example of the power of public education.

Nothing would have pleased her more.

Born in 1913, the oldest of seven children in a poor family, Snow lost her father to violence when she was 13. Her mother took in laundry to support her children.

But Mary C. Snow overcame poverty and racism to graduate from West Virginia State College and earn a master's degree from the University of Cincinnati.

She went on to serve as a teacher, principal and inspiration on the West Side for more than five decades.

Like West Side educator Isom Cabell before her, she changed history.Snow's story resonates as strongly today as it did when her generation was in elementary school.

As my friend filmmaker Jordan Freeman noted on facebook, "It's very representative of WV government's disrespect of its own citizens that the school board won't name the school after a well-respected community teacher, a small thing in the scheme of things, but a very clear example of unresponsive state government."

Community leaders including Reverend Watts are circulating a petition that already had 500 signatures as of December 15, according to your paper.

Jordan is planning a petition on Change.org (the same site that Molly Katchpole used to used to persuade Bank of America to cancel its $5 debit card fees. Jason explains, "They've been doing great on-the-ground organizing to get this name change, as the tip of the iceberg about basic community respect. An online petition will hopefully help further that effort." (I'll include a link when the petition is online.)

The Gazette has special reports which open its archives on scoundrels such as bank robber Roy Plummer and disgraced politician Jerry Mezzatesta. Also on some of the scourges that let outsides stereotype WV and Appalachia, in general, as benighted: drug overdoses, mining disasters, mountaintop removal. How about a special report on one of its outstanding assets, Mary C. Snow?  A good place to start might be the articles on the current controversy, as well as your obituary and the February 16, 1996 interview and the March 24, 1996 story on Ms. Snow's role in the origins of unity day.