U.S. District Attorney Goodwin: Alpha "not a life, it's not a being, it can't go to jail." 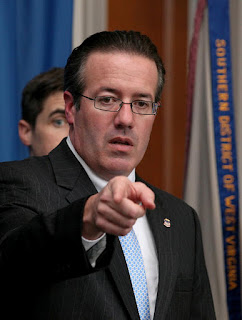 Editor's note: This was my draft of an article commissioned by The Guardian which appeared later the same day as, Who will pay for the Upper Big Branch mine disaster?: "Massey Energy's owner makes a $209m settlement, but safety violations that killed 29 miners in West Virginia go unpunished"


Montcoal, WV.  3:27 PM on Monday, April 5, 2010.  It was the worst U.S. coal-mining disaster in nearly 40 years.  Twenty months ago, just across the river from Coal River Mountain  on Cherry Pond Mountain near its mountaintop removal mine, Massey Energy's underground mine at Upper Big Branch exploded.

We learned right away that at least twenty-five men had been killed, two more injured, one gravely. Four days dragged on, while we hoped for a miracle, but four missing men were dead. Over the course of time we learned from an independent report and another by the United Mine Workers that Massey had failed to maintain its ventilation systems properly causing methane levels to increase to dangerous levels.

According to Ian Urbina and Michael Cooper, writing April 6 in the New York Times,


In the past two months, miners had been evacuated three times from the Upper Big Branch because of dangerously high methane levels, according to two miners who asked for anonymity for fear of losing their jobs.

Flash forward to 3:00 p.m. on December 6, 2011, thirty miles away in the state capital of Charleston. The U.S. Mining Safety and Health Administration released its investigation report concluding that the disaster was "entirely preventable," caused in part by a pattern of major safety problems and Massey's efforts to conceal hazards from government inspectors. A summary video is here.

Earlier, at 11 a.m., U.S. District Attorney. Booth Goodwin announced that his office, along with the Federal Bureau of Investigation and the Department of Labor had entered into a non-prosecution agreement which will cost Alpha Energy Resources, Inc., which had acquired Massey, $209 million.

Massey’s reputation was probably beyond repair.  Writer Jeff Goodell had profiled its CEO, Don Blankenship, as the "Dark Lord of Coal Country, the industry's dirtiest CEO. In southern Appalachia we knew Blankenship only too well.As Goodell described him, accurately,


he grew up in the coal fields of West Virginia, received an accounting degree from a local college, and, through a combination of luck, hard work and coldblooded ruthlessness, transformed himself into the embodiment of everything that's wrong with the business and politics of energy in America today — a man who pursues naked self-interest and calls it patriotism, who buys judges like cheap hookers, treats workers like dogs, blasts mountains to get at a few inches of coal and uses his money and influence to ensure that America remains enslaved to the 19th-century idea that burning coal equals progress. And for this, he earns $18 million a year — making him the highest-paid CEO in the coal industry — and flies off to vacations on the French Riviera.

Blankenship left Massey in December 2010.  December 6, ABC News tells us Don Blankenship accepted a $12 million golden parachute. Other parting gifts included an additional $5,000-per-month to serve as a Massey consultant for two years, paid health insurance, a secretary, residential property rights and accrued pay from his employment, including performance bonuses. In return, Blankenship agreed not to compete with Massey for two years and to cooperate with the company to resolve any litigation that arose during his tenure.

And yet, Kentucky records, alluded to by ABC, show that on January 26, 2011, Blankenship signed as president in a corporate filing for McCoy Coal Group. The corporation had previously registered its incorporation on January 11, under a slightly different name.


When Alpha announced January 29, 2011 that the company would spend $7.1 billion to acquire Massey, Alpha CEO Kevin Crutchfield said that "At the end of the day, we were actually able to get comfortable with the exposed risk" and Massey's estimated $150 million in losses related to the disaster was "appropriate." Massey had already taken a charge of $128.9 million during 2010 to cover costs from the explosion, including workers' compensation, restitution for the families of the miners and expected litigation costs.

Under the December 6 agreement, Alpha will make payments and safety  investments totaling $209 million:
As Cecil Roberts, of the United Mine Workers pointed out in a newsrelease I received,


We have repeatedly heard from the current congressional leadership that they were not prepared to act until they knew what happened at UBB. Now they know.

He called for strengthened whistleblower protections for workers who want to report safety issues and official standing for the families of the victims in the investigative process.

With regard to the non-prosecution agreement, Alpha Natural Resources says that it acquired Massey


more than a year after the tragic explosion at their Upper Big Branch mine. Alpha believes the settlements announced today provide the best path forward for everyone. The bulk of the settlement will fund safety training, research and advanced technologies that the company believes ultimately will create a safer work environment for coal miners throughout the industry.

Ry Rivard, capitol reporter for the Charleston Daily Mail quoted District Attorney Goodwin as saying the non-prosecution agreement represented a "balance" and that Alpha was "not a life, it's not a being, it can't go to jail."

Twenty-nine men dead. Two more injured. Two hundred and nine million gets Alpha off the hook for prosecution? So much for the personhood of corporations. Stay tuned to see if any individuals get prosecuted other than Massey's security director. At least this time, the government didn't sign away its rights to do so.

Goodwin made his announcement at the Robert C. Byrd federal courthouse in Charleston, WV, named after that state's late beloved U.S. Senator, who has since been replaced by its former governor Joe Manchin. Although Byrd was generous in his support of the coal industry, towards the end of his life he was losing patience with Massey and its record of reckless disregard of its workers safety.


The old chestnut that “coal is West Virginia’s greatest natural resource” deserves revision. I believe that our people are West Virginia’s most valuable resource. We must demand to be treated as such.

As Vernon Haltom, of Coal River Mountain Watch told me in an email interview,


Spending on 'major safety initiatives' after 29 miners were killed is closing the barn door after the horse is out. The executives who routinely place profits above the lives of miners and community members must be held accountable for all their crimes. Until then, there will be no sense of justice where the coal industry leaves a legacy of death and destruction.

Goodwin assures us that the criminal investigation continues. He says that Alpha, and by extension, its predecessor Massey is not a person and can't go to jail. But what about Don Blankenship?
Posted by Beth Wellington at 12:01 AM